Hertha Berlin vs Mainz – With a win over Mainz in the 33rd round of the Bundesliga on Saturday afternoon at Olympiastadion Berlin, Hertha Berlin has a good chance of staying in the top flight of German football.

The lone goal surrendered occurred seven days ago in a 1-1 draw at SchucoArena against direct relegation rivals Arminia Bielefeld, who equalised in the opening minute of additional time with their first effort on target of the season.

Hertha Berlin has a challenging match against Borussia Dortmund on the final day of the season at Signal-Iduna-Park, and they will be looking to put any questions about their top-flight position to rest here against Mainz.

The visitors are currently ninth in the Bundesliga table, and their only goal for the final two games is to finish in the top half.

They will go to the capital fresh off a huge 3-1 win at MEWA ARENA over Bayern Munich, the new (old) champions.

The draw was the most common result in the history of this matchup, appearing in 14 of the previous 35 head-to-head encounters.

In their previous five meetings with Hertha Berlin, Mainz had won three and drawn two. Only two of the last six head-to-head meetings have resulted in fewer than three goals.

Throughout the season, and especially in the second half, Mainz has been a terrible traveller. They’ll be coming off a run of ten losses in their previous 12 away games.

We can find value in backing the home victory at 2.50 odds since Hertha Berlin has improved in recent weeks under Magath and they absolutely need a win here to mathematically guarantee survival. 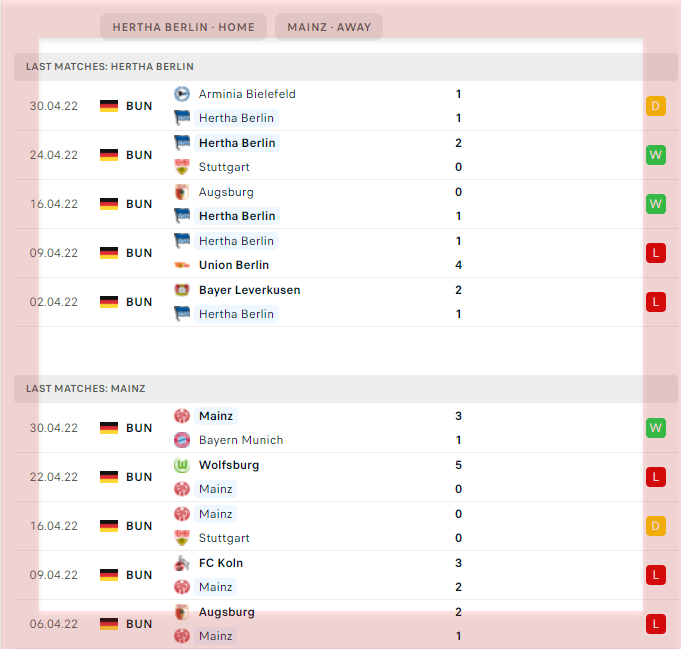