Hertha Berlin vs Hamburger SV – On Thursday, Hertha Berlin and Hamburger SV will face off in the first leg of their Bundesliga relegation playoff at the Olympiastadion Berlin. The hosts ended 16th in the regular season, while the visitors finished third in the second division to keep their promotion hopes alive.

Despite losing 2-1 to Borussia Dortmund in stoppage time at the Westfalenstadion on Saturday, Hertha Berlin was on track to clinch Bundesliga football for another season. Stuttgart was heading for the relegation playoff after drawing 1-1 at home to FC Koln, but a thrilling 92nd-minute goal from Wataru Endo helped the hosts grab all three points and leapfrog Hertha to safety.

Die Alte Dame’s nine-year tenure in the Bundesliga is now in jeopardy, as they will compete in the relegation playoff for the first time since 2011-12, the season in which they were promoted to the Bundesliga. The match on Thursday will be a special occasion for head coach Felix Magath, who played over 300 times for Hamburg between 1976 and 1986, winning three league titles and the European Cup, before leading the club from 1995 to 1997.

Hertha will be sure of victory on home turf, having won all five of their previous games with Hamburg in the Olympiastadion Berlin, scoring at least twice on four occasions ,Only one of the last nine teams to finish 16th in the Bundesliga have lost the relegation playoff against their second-tier rivals, which bodes well for Die Alte Dame. After three consecutive fourth-place finishes in the second tier, Hamburg finally finished in the top three this season, thanks to a strong finish to the regular season.

The Red Shorts won their past five league games by a combined score of 16-5, putting them third on goal difference ahead of SV Darmstadt 98. On the final day of the season, Tim Walter’s team won 3-2 at Hansa Rostock, with Robert Glatzel scoring his 22nd goal of the season. The 28-year-old is in red-hot form, having scored six goals and assisting on four others in his last eight appearances.

Hamburg has won each of their last three league matches on the road, scoring 11 goals in the process. Both teams are in different places heading into Thursday’s match, but the momentum is with Hamburg, who will be confident of exploiting Hertha Berlin’s porous defense given their goal-scoring streak ,With a number of key players absent for Hertha, we can see the visitors scoring a narrow victory, giving them the advantage heading into the second leg on Monday. 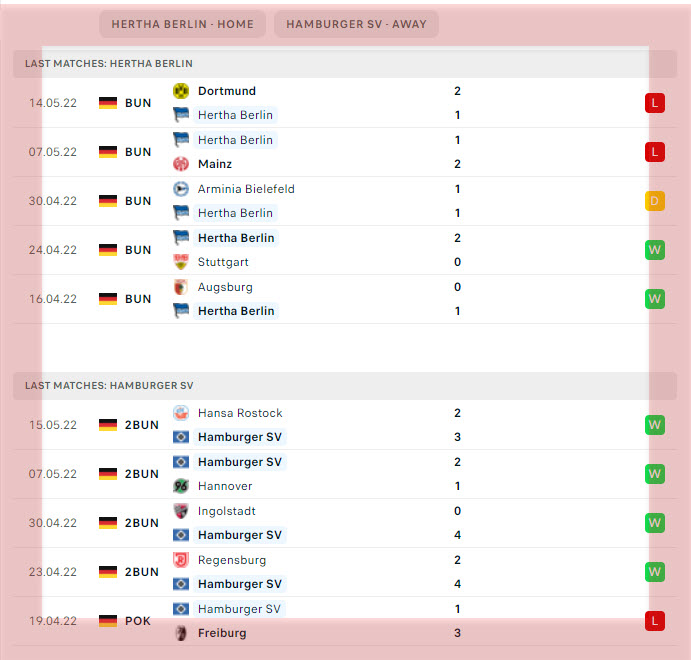