Helsingborg vs Norrkoping – Preview, and Prediction

Helsingborg vs Norrkoping – Helsingborg has had a disappointing start to the season. They have only one win since the beginning of the season.

The team has two draws and three losses from the remaining matches. The team has also gone winless in their last three encounters. Helsingborg is currently in 13th place in the league rankings, with only five points from five games.

Helsingborg’s last match was against Djurgarden. Both teams scored two goals in the encounter, which resulted in a 2-2 FT draw.

Norrkoping had a shaky start to the season, but has improved in recent games. The team’s first three matches were all losses.

The squad has won its last two matches in a row, with the other match ending in a draw. Norrkoping has also scored more than 1.5 goals in the last two games. Norrkoping is in tenth place in the league rankings, with seven points.

Norrkoping defeated Varnamo in their most recent match, with Norrkoping scoring two goals and Varnamo scoring none. The game ended with an FT score of 2-0.

Helsingborg has yet to develop a winning mindset. Helsingborg has gone winless in its last three games, despite scoring in each of them. Norrkoping is unbeaten in their previous three games and has won their last two games in a row.

Helsingborg has the advantage of being able to play on their own turf. The squad won the game on their home turf for the first time and had an unbeaten streak going, which they will want to maintain.

Norrkoping has won their first away match following the previous encounter. With that triumph, they were able to halt their losing skid.

According to the statistics, Norrkoping will most likely win the match. Both teams’ recent encounters, as well as past head-to-head matches, have concluded with above 2.5 goals. As a result, we may expect the game to end with more than 2.5 goals. 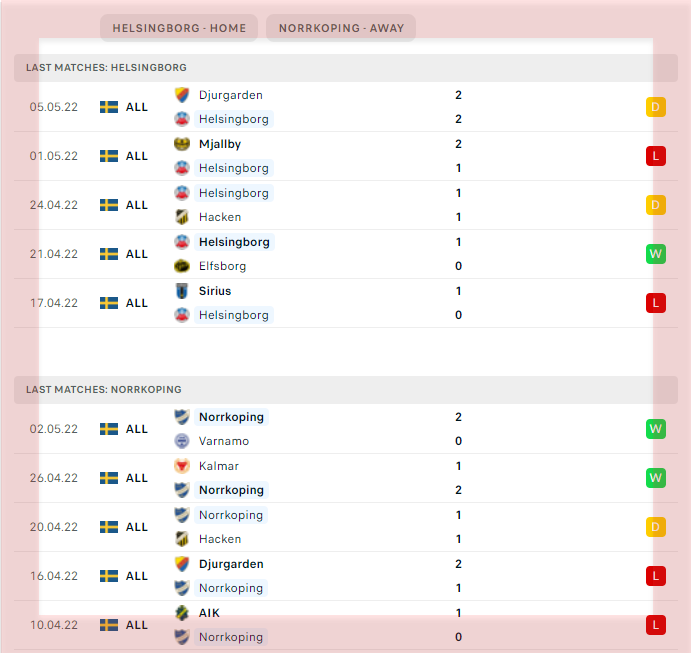