Helsingborg vs Elfsborg – Preview and Prediction

Helsingborg vs Elfsborg – This season, Helsingborg has been by far the poorest of the Swedish top division. They’ve had a losing record since the beginning of the season, and they’ve been allowing in a lot of goals.

Elfsborg, on the other hand, has gone undefeated since the start of the season, and they appear determined to challenge for first place.

Furthermore, they have a fantastic head-to-head record versus this competitor over the years. Elfsborg should win this Thursday at the Olympia, based on the current situation.

Elfsborg won 1-0 in their most recent meeting, and they have won six of their previous eight meetings. In two of the previous three meetings at this location, the visitors had scored two or more goals. The last time the visitors won at this venue was seven years ago.

Elfsborg, on the other side, defeated Varnamo 4-1 at home in the previous game week. They were also unbeaten in seven of their previous nine games, including a three-match winning streak.

Also worth noting is the fact that they have only lost once on the road since October. Elfsborg is expected to win this Thursday based on these observations and previous h2h statistics.

This season, Helsingborg has a perfect losing record. They are the team with the fewest goals in the competition. Elfsborg, on the other side, has gone undefeated on the road thus far, and has also gone undefeated overall this season, save for a setback in the opening game.

Helsingborg vs Elfsborg – Head to head 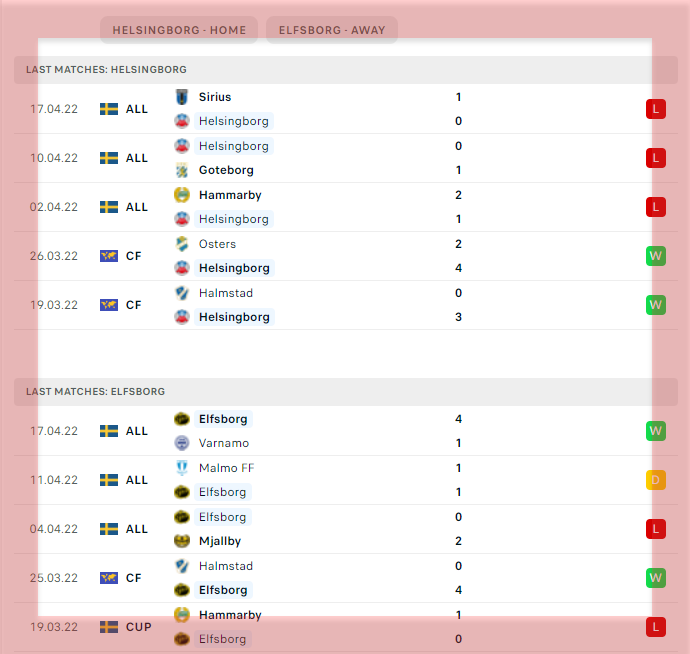