Heerenveen vs Sparta Rotterdam – For the majority of the last Eredivisie campaign, Heerenveen’s performance was about par for the course. They managed to maintain a respectable level of play throughout the year, which helped them finish in eighth place and qualify for the Eredivisie Conference League Play-offs.

They expect to have a lot more successful season this year. The previous season in the Eredivisie, Sparta Rotterdam had a poor showing. Due to their lacklustre performance, they are currently sitting at the bottom of the standings.

They were dangerously close to the bottom of the table, and ultimately avoided relegation by a single game’s margin. It appears that Sparta Rotterdam’s first league game of the season will be on Friday, August 31, when they travel to Abe Lenstra Stadion to take on Heerenveen.

Out of the last 10 times these two teams have met, Heerenveen has won five times, drawn three times, and lost twice to Sparta Rotterdam. Seven of the last 10 head-to-head meetings between these two clubs ended with both teams scoring.

The most recent meeting between these two teams here resulted in a scoreless stalemate. Good performances in preseason games suggest a promising season for Heerenveen.

In those exhibition games, they went undefeated. Results against tough competition, such as Excelsior and Pec Zwolle, show that the team can compete successfully.

Heerenveen’s home form was very strong last season. They made it last longer by making it impenetrable even to friends. The next step is to try to rack up more of those by concluding a positive early in the season.

On the other side, Sparta Rotterdam were having a great form towards the close of the prior season. Since they played so brilliantly in the final minutes, they were able to avoid the bottom-of-the-table drop.

Similar results were achieved by Rotterdam in their exhibition games following the conclusion of the previous season. At the moment, they are in the midst of a five-game road winning streak. 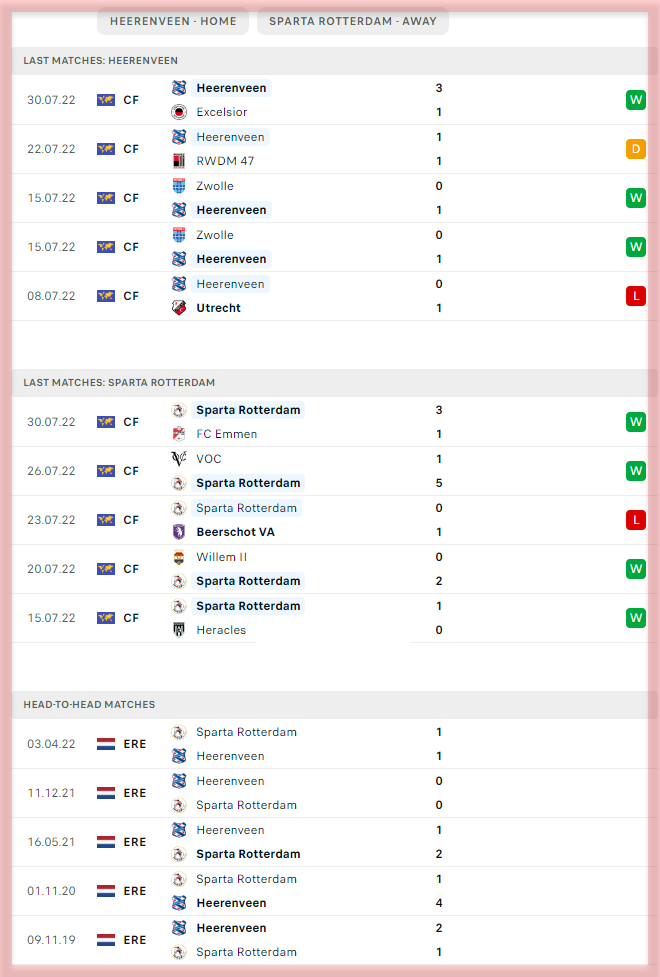