Heerenveen vs AZ Alkmaar – On Thursday, Heerenveen and AZ Alkmaar will face off in the first leg of their Europa Conference League playoff semi-final at the Abe Lenstra Stadion. The hosts finished eighth in the regular season, three places and 20 points behind fifth-placed AZ Alkmaar ,Heerenveen finished in the top half for the first time in four years after defeating Go Ahead Eagles 3-1 at home last weekend.

Sydney van Hooijdonk’s brace and Anthony Musaba’s late score put De Superfriezen three goals ahead, until Jacob Mulenga netted a consolation goal for the visitors late in the game. Ole Tobiasen, the interim manager, will be pleased to have guided his team into the top eight after they were on the danger of relegation earlier in the season. Tobiasen took over when Johnny Jansen was fired at the end of January, and he had a rough start in charge, losing his first four games and surrendering an average of two goals per match.

However, their form has since improved, as they concluded the regular season with only two defeats in their final 11 league games (five wins and four draws), helping them climb into the top half of the table and into contention for European qualification. Heerenveen will get closer to European qualification for the first time since they competed in the Europa League in 2009-10 if they win both legs against AZ Alkmaar. While Heerenveen finished the regular season on a strong note, AZ Alkmaar had a disappointing season, winning only two of their final nine Eredivisie games.

Following three consecutive score draws, RKC Waalwijk was defeated 3-1 at home on the last day of the season last weekend. On the stroke of halftime, Dani de Wit cancelled out Finn Stokkers’ opener, but replacements Jurien Gaari and Roy Kuijpers scored in the closing half-hour to give the visitors the three points. After finishing the season in fifth place, their lowest league position in five years, AZ manager Pascal Jansen will be hoping for a win on Thursday to put a stop to their terrible form.

The Cheeseheads, who were eliminated in the Europa Conference League round of 16 earlier this season, will be confident in their ability to defeat Heerenveen, having won each of their last five meetings with them, scoring 14 goals in the process. Despite their poor run, AZ has found the net frequently, and Heerenveen has scored frequently in recent games, thus an intriguing match is expected at the Abe Lenstra Stadion ,With little separating these two clubs, a score draw could be on the cards, holding the tie in a tight grip heading into the second leg on Sunday. 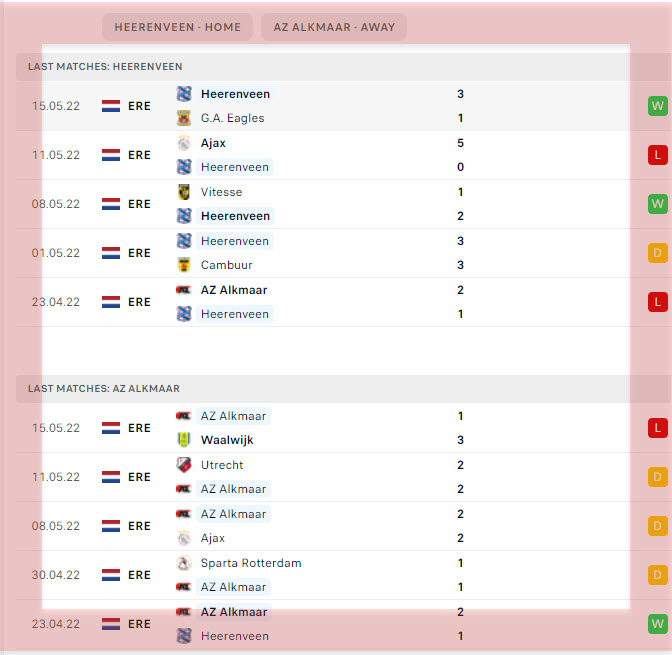