Hearts vs RFS- Preview, and Prediction

Hearts vs RFS- If Hearts has any chance of playing springtime football in European competition for the first time since 1988/89, they must win this game and the other UEFA Europa Conference League group match. After only one group win thus far, heavy back-to-back losses to Fiorentina have made that a difficult assignment, and Robbie Neilson’s team has given up twice as many goals as any other team in Group A.

This defensive weakness has caused the Jam Tarts’ recent struggles, as they have failed to win any of their last six games across all competitions (D1, L5). During this stretch, they have also given up 20 goals, including a 4-3 loss to Celtic at the weekend that caused them to fall outside the top six in the Scottish Premiership. Hearts have only kept two clean sheets so far this year, but one of those came in the 2-0 victory in the previous meeting, giving them hope in this situation.

However, the Latvian champions are probably only playing for pride as they seek their first-ever success in a European group stage. Riga FS come to Edinburgh knowing that a win is essential to keep their exceedingly narrow prospects of progression alive. It’s been a rude awakening for Viktors Morozs’ team because it has now been three games since they managed to score their lone goal against Fiorentina. If they want to learn anything from their first trip to Scotland, this trend needs to alter.

After losing the Latvian Cup final, Rigas at least managed to halt a three-game losing streak at home with a decisive 4-0 victory over Super Nova at the weekend. They’ve really just lost one of their previous 15 league games (W9, D5), a record they’ll be hoping will motivate them to improve on their outstanding 1-1 draw against Fiorentina to start their group campaign.

Players to keep an eye on: Lawrence Shankland scored a hat-trick in Hearts’ Saturday loss to Celtic. He also scored a goal in the rematch. Andrej Ili, who scored the team’s lone goal during the group stage and has never lost when scoring for the Latvian champs, will be looking to cause damage for Riga FS (W16, D4).

Hearts vs RFS – Head To Head 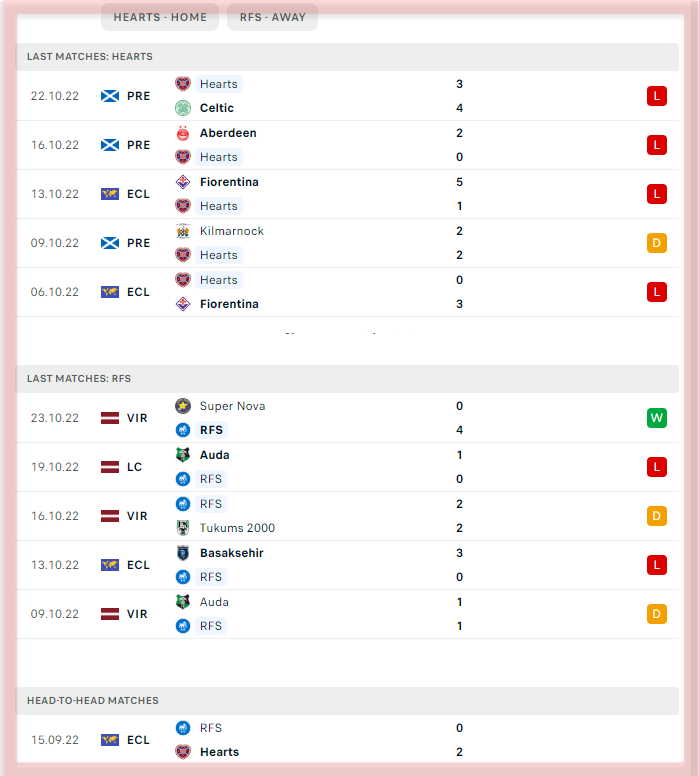