Hatayspor vs Giresunspor – Preview, and Prediction

Hatayspor vs Giresunspor –  Hatayspor’s form has been uneven since the start of the season. Their lackluster performance earned them a spot on the table. They are now ranked 13th in the rankings with 50 points.

Hatayspor were defeated 3-1 on the road by Konyaspor in their most recent league match. With that loss, they have now gone eight games without a win in the league. They’ll be trying to end the season on a high note by snapping their losing streak.

Meanwhile, Giresunspor has been inconsistent throughout the season. They are likewise situated outside the top half of the table. They are in 15th place with a total of 45 points, despite having nothing special.

In their most recent league match, Giresunspor drew 1-1 with Istanbul Basaksehir at home. With that draw, they have now gone three games without losing in the league. Two of those three unbeaten games, though, ended in a tie.

Hatayspor won the rematch 0-1 in the opposite matchup. Hatayspor is undefeated in their last six meetings with Giresunspor. Five of their nine head-to-head matches were high-scoring affairs.

Hatayspor are in a different form at home this season compared to their uneven overall performance. They have won eight of their last ten league games at home.

Giresunspor, on the other hand, has had a shaky road record recently. They have conceded two or more goals in four of their last eight league games away from home.

Furthermore, Hatayspor has a solid recent head-to-head record versus Giresunspor. Based on the above data, we believe Hatasypor will win their Super Lig match against Giresunspor on Sunday. We anticipate goals from both teams.

Hatayspor vs Giresunspor – Head -To- Head 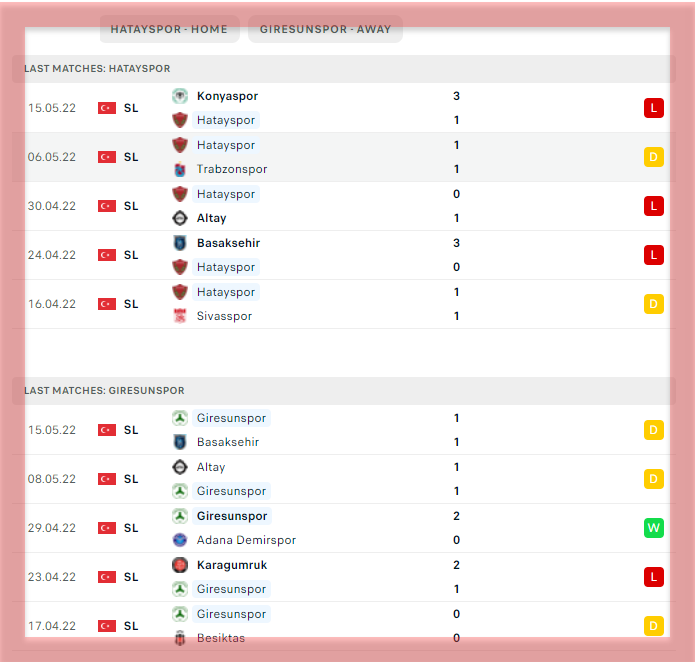