Hatayspor vs Altay – Preview and Prediction

Hatayspor vs Altay – Altay needs at least 10 more points to get out of the drop zone. They hope to get a win on the road when they play Hatayspor at the Atatürk Stadium in Antakya on Saturday. They are in the middle of the table.

Tenth-place Hatayspor has 49 points from 34 games. They won 14 times in the league, drew 7 times, and lost 13 times. The hosts are tired and not focused because they haven’t won any of their last five league games. At this point, they have nothing to worry about because they aren’t getting promoted or going down.

When it comes to Altay, however, they are in the 17th place on the table with 30 points. Of the 34 games they played, they won only eight of them, drew six, and lost 20. Need 11 more points to stay up with just 4 games to go in the season.

In their last game, Altay lost again. They lost 1-0 to Galatasaray, who played very little. A home game that they had to win to keep their slim chances of survival alive was a game they had to win. Their performance clearly shows why they are in the state they are in. Hatayspor won two of their three games. In their last nine games against each other, Altay only won once. This is how it works: The last nine games in which they played each other saw both teams score.

Hatayspor hasn’t lost in their last seven home league games. But they only won once in their last six league games.
Altay, on the other hand, hasn’t won in their last five games as they look set to be relegated to the second tier of Turkish football. They also lost two away games before coming here. A low-scoring game is what we think will happen in this game between two teams who aren’t playing well. The home team is most likely to win this game.

Hatayspor vs Altay – Head To Head 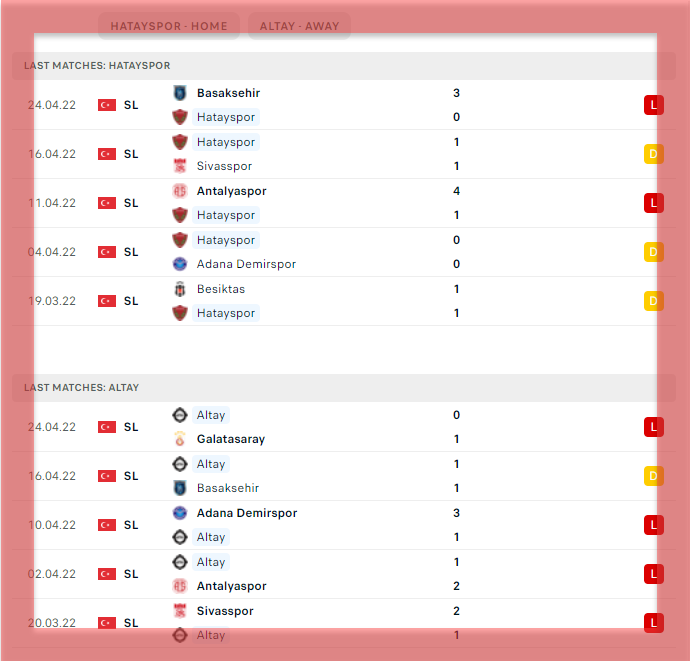