Harrogate Town vs Leyton Orient – Since the league’s inception, neither Harrogate nor Leyton Orient have maintained a fair level of consistency. Both of these League Two sides will face tomorrow at EnviroVent Stadium.

Harrogate boasts one of the season’s weakest defensive units. Leaking goals at a high rate snuffed out their chances of posting a solid performance on numerous occasions. As a result, they currently sit in 16th place on the standings with 44 points.

Harrogate’s most recent league match ended in a 1-1 draw at home to Walsall. With that draw, they have now gone six league matches without a victory.

Meanwhile, Leyton Orient’s defensive and offensive lineups are ordinary. They now hold the 18th position in the rankings with a total of 40 points. However, their recent league form is extremely encouraging in light of their current situation.

Leyton Orient defeated Rochdale 3-1 at home in their most recent league match. They stopped a 15-game league losing skid with that victory. They’ll be trying to capitalize on their victory.

By all accounts, we anticipate an extremely competitive contest between these two bottom-half occupants. Given both teams’ porous defenses, anticipate plenty of goals.

Harrogate’s recent home form has been inconsistent. They don’t have any recent stats to back up their chances of putting in a strong performance in this match.

On the other hand, Leyton Orient are coming off three consecutive league road draws. We watched them score goals, indicating that they have the ability to score against this Harrogate side.

Given that Harrogate have drawn two of their past three league matches, we anticipate them to share the spoils with visiting Leyton Orient at the conclusion of this one. 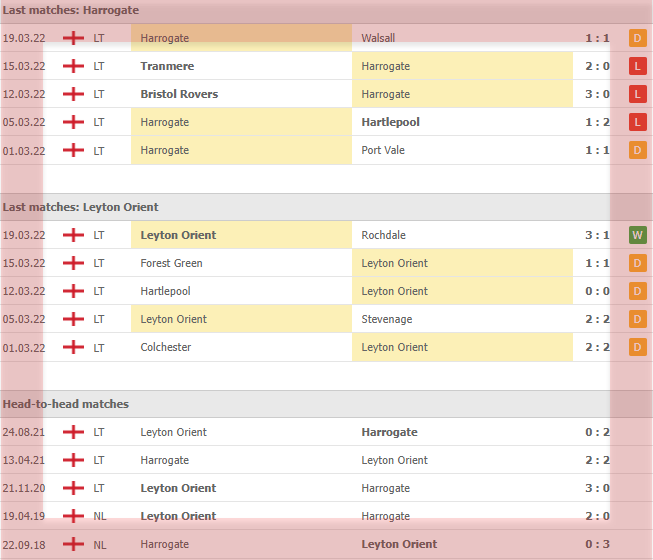