Hammarby vs Norrkoping – Preview, and Prediction

Hammarby vs Norrkoping – Hammarby has had a strong start to the 2017 Allsvenskan season. With eight previous bouts under its belt, the tea has only lost once.

The team has also won five games in the remaining matchups. Their outstanding play has helped the team climb the standings and establish themselves as one of the league’s top challengers.

They are currently in second place, with 17 points earned from their matches. Hammarby’s most recent match was against AIK.

Both teams scored three goals in the encounter, which ended in a 3-3 tie in overtime. Norrkoping had lost their first two games of the season.

At the start of the season, the club had lost three games in a row. However, the team’s recent performances suggest that they are performing well, having won four consecutive games.

The team’s recent play has enabled them climb to seventh place in the league with 13 points from their matches. Norrkoping dominated GIF Sundsvall in their most recent encounter.

Norrkoping scored five goals in the match, while Sundsvall only managed one, resulting in a 5-1 FT victory for Norrkoping.

Hammarby won the last h2h match with a 3-2 FT result. Hammarby and Norrkoping have each won two of their last five head-to-head matchups. In the last two home matches against Norrkoping, Hammarby has won both.

Norrkoping has been in excellent form in recent contests. They’ve won four games in a row. They intend to keep their winning streak going.

Hammarby has performed admirably in their games. They haven’t won in their last three games, though. Hammarby enjoys the advantage of being able to play at home.

They have not lost a single match at home and have scored more than 1.5 goals in three of those games. Norrkoping has already completed four road journeys.

They have won the last two matches after losing the first two. With Hammarby’s recent matches ending in draws, we may expect the match to result in a Hammarby win or a tie.

Both sides, though, have scored in recent meetings. As a result, we may expect the game to end with both teams scoring.

Norrkoping has scored in the second half of each of their past three matches, and they will most likely do it again in this one.

Hammarby vs Norrkoping – Head To Head 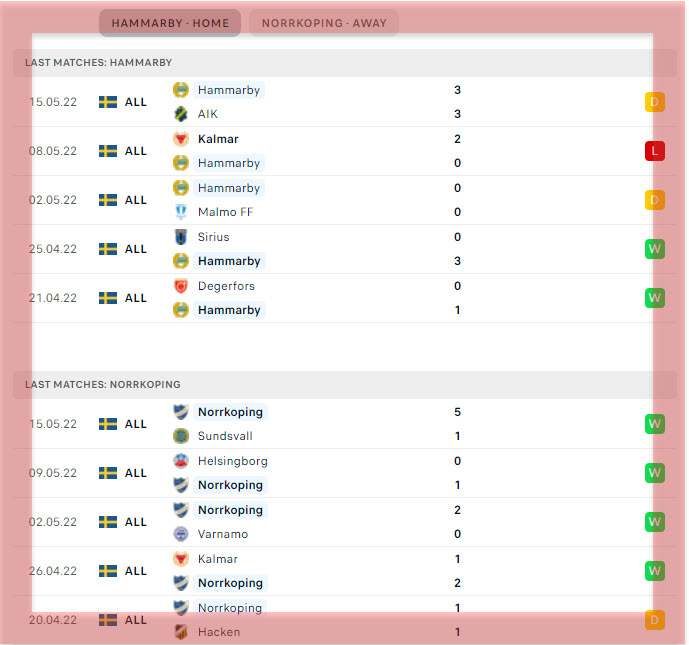