The hosts will enter the match with a slim lead after winning the first leg 1-0 on Thursday, with Ludovit Reis scoring just before the hour for the second-tier side.

Hamburg has not competed in Germany’s top division since the 2017-18 season, when they were relegated in 17th place. They then finished fourth in three consecutive 2. Bundesliga seasons before finishing third this season, with 60 points from 34 games.

Due to their outstanding performance in the first leg in Berlin, the Red Shorts have given themselves a serious opportunity of returning to the Bundesliga, with Reis scoring the game’s only goal in the 57th minute.

Tim Walter’s team has won each of their previous five games in all competitions, including three of their last four in front of their home fans, and they will be confident of completing the job on Monday to secure a place in the 2022-23 Bundesliga season.

When the two sides last met at Volksparkstadion in March 2018, Hamburg lost 1-0; a draw in the second leg would be enough for the second-tier side, although there hasn’t been a stalemate between these two clubs since August 2011.

In the meantime, Hertha concluded the regular Bundesliga season in 16th place, with only 33 points from 34 games in a challenging campaign. Felix Magath’s side has already lost each of their previous three games, including both of their Bundesliga matches against Mainz and Borussia Dortmund, and have only won once on the road since October, indicating the magnitude of their task in this encounter.

After being demoted from the Bundesliga in 2011-12, the two-time German champions have not played outside of the Bundesliga since the 2012-13 season.

Hertha finished seventh and sixth in 2015-16 and 2016-17, respectively, but they were 14th last season, and their troubles this season mean they are fighting for survival.

The Berlin side can take heart from the fact that they have won two of their past three meetings with Hamburg, but they are a large underdog on Monday after losing the first leg, and their away form in 2022 has been dismal. 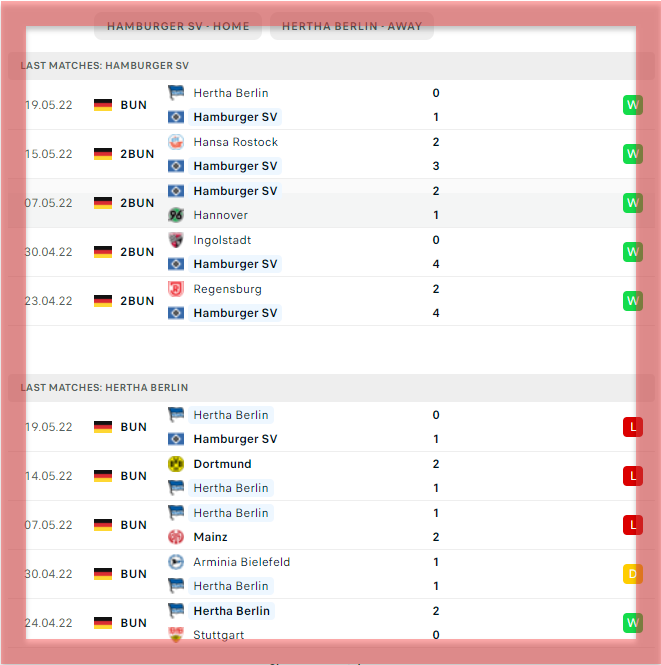