Hacken vs Helsingborg – Preview, and Predictions

Hacken vs Helsingborg – The Allsvenskan’s best and worst offensive lines will face off in the contest of Gameweek No. 17 tomorrow afternoon at Bravida Arena.

Hacken outscored every other side in the league in scoring during a dramatic 4-4 stalemate away at Elfsborg last weekend.

The lead changed hands multiple times at Boras Arena as Hacken twice trailed by a goal before regaining control twice in a row.

Alexander Jeremejeff, who finished with the highest score in the contest, put on yet another exceptional performance that needs to be recognised.

The talented Swedish striker scored three goals for Hacken last Sunday, giving him an incredible 18 goals in the Allsvenskan this season.

For context’s sake, Varnamo’s Marcus Antonsson, who has nine goals to his name, is the second-best Allsvenskan scorer.

Hacken typically plays attractive, offensive football under Per Matthias Hogmo. They dropped from first to second in the league standings after collecting just one point from their previous two games.

However, Hogmo’s men will have a great chance to make things right when they face Helsingborg on Monday in the afternoon.

The visitors have struggled mightily to compete at this level from the beginning of the season. They only had one victory all year, a 1-0 home win over the terrible GUF Sundsvall two weeks ago.

In any of the past three head-to-head contests between these adversaries, we didn’t have a winner. In their last 18 encounters with Helsingborg at Goteborg, Hacken has a great home record with 10 wins, 6 ties, and only 2 losses.

Eight prior head-to-head games between the two sides only had one game with three or more goals. We wouldn’t be surprised to see anything other than a big victory for the free-scoring Hacken in this game given how significantly different the two squads are.

Alexander Jeremejeff is a good option to score anytime at 1.80 odds given that he has scored 18 goals for the hosts this season. 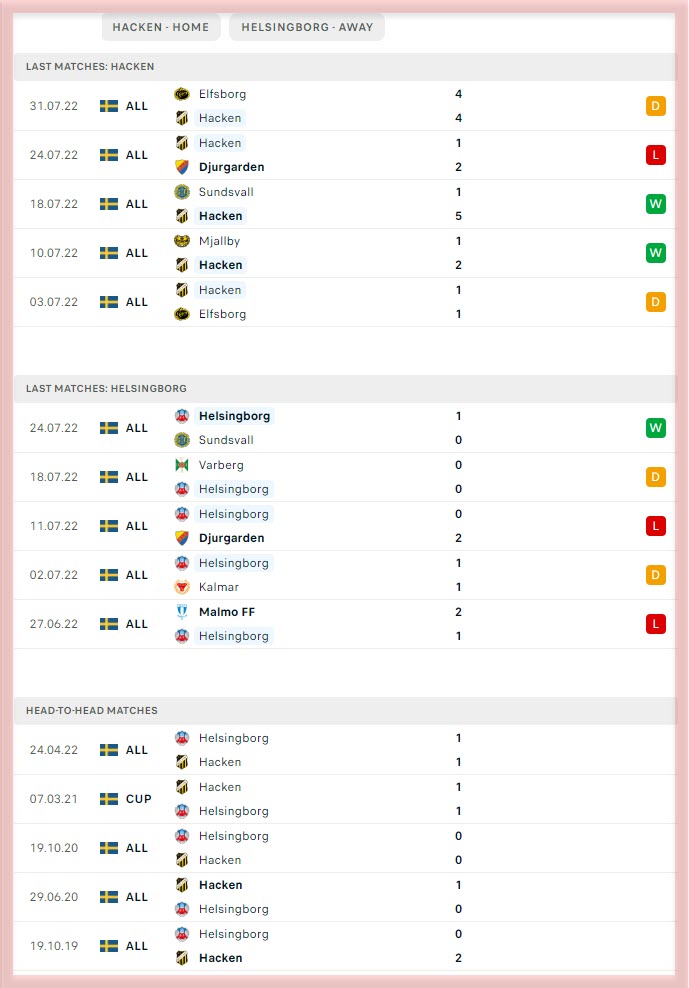