The visitors, on the other hand, need to win all three points if they want to have a small chance of making the playoffs on the last day of the season.

Grimsby is currently in sixth place, and they have a three-point lead over Dagenham & Redbridge going into Tuesday’s game. Dagenham & Redbridge is just outside the playoff places.
If the Mariners can beat Boreham Wood by at least one point, they will stay in the top seven.

The Mariners will have to get back on their feet before the midweek game because they lost 3-1 at home to Maidenhead United on the weekend.

Luke Waterfall scored an own goal to give Maidenhead the lead. Things got worse for Waterfall a minute later when he was shown a red card. Sam Barratt and Ryan Upward scored for the visitors to give them a three-goal lead. Tristan Abrahams scored a goal for Grimsby in the 76th minute, but it was too little, too late.

The visitors, on the other hand, are ninth in the standings and are six points away from making the playoffs.
Boreham Wood will need to win their last two games and have other teams lose less than they do in order to finish in the top seven.

They would also need a change in their goal difference, but the Wood’s main goal will be to get the all-important three points on Tuesday. This would make the last day of the season very exciting.

Boreham Wood’s job would have been a little bit easier if they hadn’t drawn their last two games. Luke Garrard’s team gave up a two-goal lead against Yeovil Town at the weekend in the most recent of these draws.

Tyrone Marsh and Dennon Lewis put the Wood in a good position to get the three points, but Morgan Williams and Luke Wilkinson both scored to make sure that Garrard and his players will have to beat Grimsby if they want to make the playoffs. 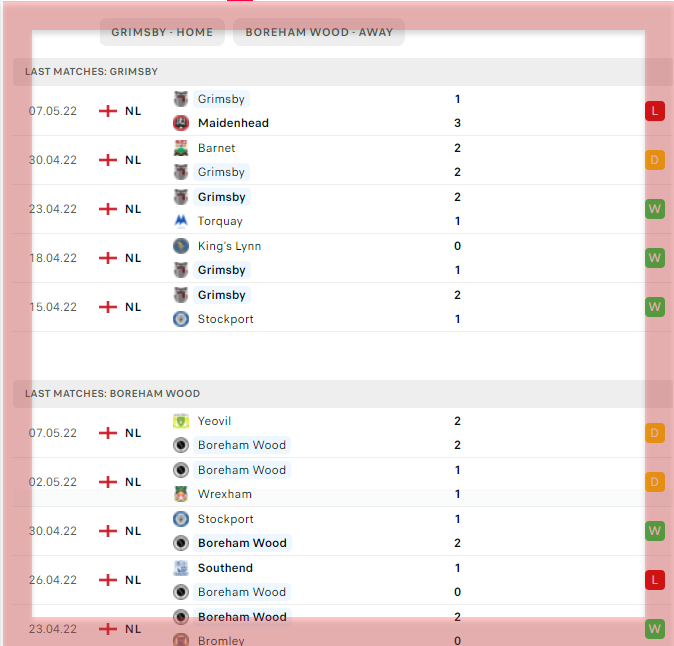