Greuther Furth vs Karlsruher –During the most recent Bundesliga season, Greuther Furth had a terrible record. They came in dead last in the standings, which cost them a spot in the top tier the following season.

They will be driven to do anything to go back into the first division after being demoted to the second. Karlsruher, meanwhile, had a winless record that fluctuated over the previous 2. Bundesliga season.

They finished the season in the 12th position in the league table as a consequence. They will be looking for a better season overall.
Over the course of their previous five meetings, Greuther Furth and Karlsruher have split their three wins, one draw, and one loss.

In each of the previous four head-to-head encounters between these two clubs, the both teams to score option was successful, and their most recent matchup at this location resulted in a 2-2 draw.

Before the start of the new season, Furth should be able to secure a pair of victories from their most recent friendlies. They may have viewed those exhibition matches as a positive reinforcement for their upcoming 2.Bundesliga campaign.

However, they were unable to translate the aforementioned upbeat attitudes into victories as they earned consecutive losses in their first two league games. A 2-2 draw occurred in their first home game against Holstein Kiel.

On the other hand, Karlsruher SC’s optimistic expectations didn’t materialise in their first two games of the current campaign. They lost their opening game after allowing five unanswered goals to Paderborn on the road and three goals to Magdeburg while scoring two at home.

Karlsruher’s road performance has also been dismal. In their last five away losses, they have conceded goals in an unsettling manner. When taking into account the aforementioned statistics, we are left to support Greuther Furth to defeat Karlsuher in a 2.Bundesliga matchup on Friday. 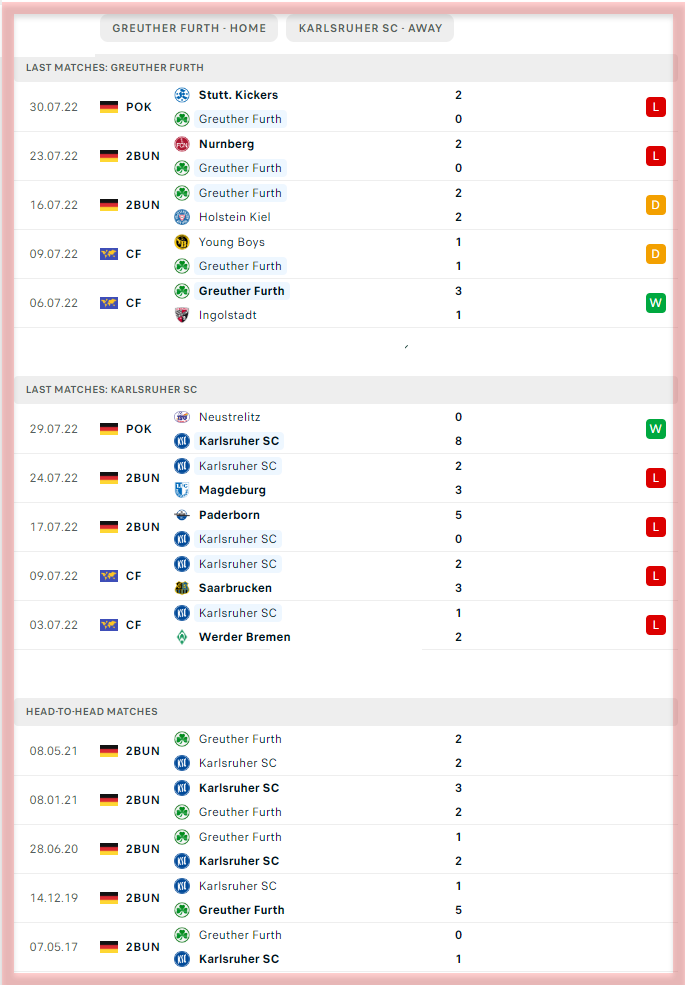