Greuther Furth vs Holstein Kiel – Greuther Furth struggled in the previous Bundesliga season. They finished at the bottom of the table, which cost them a spot in the next top division season.

They will be desperate to regain their first-division position after being relegated. Furth has won a couple of recent friendly ahead of the season’s start.

The above results will be used to strengthen their chances in the upcoming 2.Bundesliga season. In their first league game, they will wear their home shirt against Holstein Kiel.

Holstein Kiel, on the other hand, had an average season in the 2.Bundesliga. Their position on the standings was due to their average form.

They were in ninth place in the rankings, 15 points out of the safe zone. We can also see them giving it their all in the last games to secure victories.

Holstein Kiel put on a strong performance in their most recent Friday outing. In those friendly matches, we can also see their defensive line allowing several goals. They will be trying to improve on such shortcomings in the first game of the 2.Bundesliga season.

Greuther Furth has always been the dominant force in this head-to-head match versus Holstein Kiel. Both teams’ score option was successful in five of the eight head-to-head meetings between these two clubs.

Greuther Furth won their most recent meeting at this location 2-1. When analysing their previous home games, Furth is considered as mainly losing because the most of them were from the first division.

They won a friendly against Ingolstadt, scoring 3-1 at home recently. Holstein Kiel, on the other hand, has a poor track record on the road.

The majority of their recent on-road records are from the previous season. The dismal form of Kiel in previous matchups, combined with Furth’s decent head-to-head form, forces us to favour Furth to win this match. 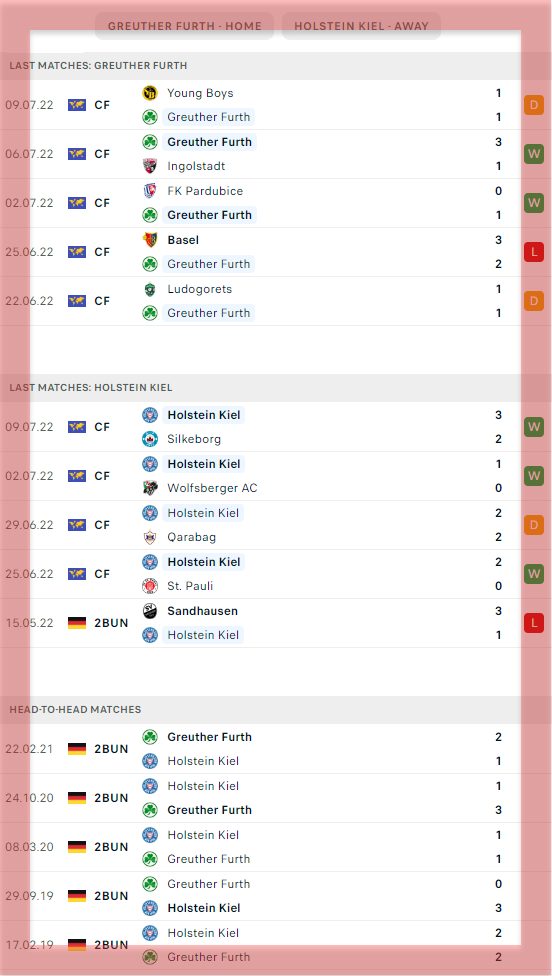