Grasshoppers vs FC St. Gallen – Grasshoppers have had varied outcomes recently in their contests. The club has two wins, four ties, and four losses in their previous ten games. With 37 points from their matches, the club is now ranked sixth in the league. With only two games remaining, the squad must win both of their remaining games to avoid falling farther down the table.

Grasshopper Club’s last encounter was against Basel. Both teams scored one goal in the encounter, which ended in a 1-1 FT draw.

In recent encounters, St. Gallen has struggled with their form. The team has lost three of its last five games while winning two of them. They have done admirably in their matches this season, putting them in fifth place on the league rankings with 47 points.

The match between St. Gallen and the Young Boys has concluded. Despite the fact that St. Gallen had levelled the score, they couldn’t retain it for long. In the encounter, Young Boys scored four goals while St. Gallen only managed one. The final score was 4-1 in overtime.

St. Gallen won the last h2h with a 2-0 FT score. Grasshoppers and St. Gallen have each won three of their last seven matches. Over 2.5 goals have been scored in three of the last five head-to-head matches.

The Grasshoppers’ home matches have not produced the desired outcomes. In their last ten home games, they have only won once. St. Gallen, on the other hand, has had a mixed bag of success on the road. The team has five wins, one draw, and four losses in its previous ten away encounters.

The match appears to be headed for a draw or a win for St. Gallen. In the majority of their matches, both teams have scored. As a result, we may anticipate both of them contributing to the scoreboard. 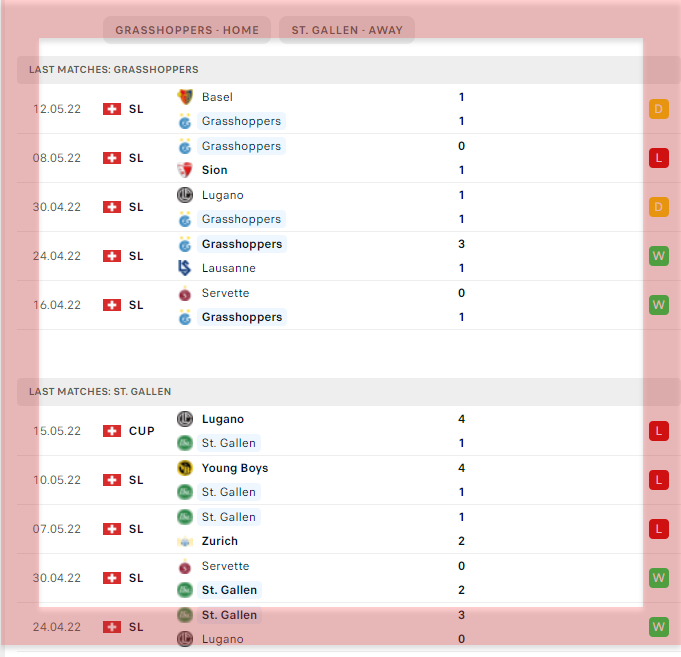