Go Ahead Eagles vs Vitesse – Preview and Prediction

Go Ahead Eagles vs Vitesse – Vitesse will be looking to bounce back after losing back-to-back league dates when they face the mid-table Go Ahead Eagles. This Sunday, these two teams will meet at De Adelaarshorst  ,With 44 points from 30 games, Vitesse sits in sixth place in the standings. They won 13 games in the league, drew five times, and lost twelve times. The visitors’ performance is deteriorating, as they have lost four of their past five matches. They’re more focused with avoiding relegation from the ECL Play-Offs and finishing the season with a European promotion.

Vitesse’s most recent league match was a 1-0 loss to Willem II at the Koning Willem II Stadion. In their last six games, their attacking side has only scored four goals, a terrible return. Vitas has also conceded eight goals in those games. Go Ahead Eagles, on the other hand, is in 9th place on the table with 36 points. They won 10 of the 30 games they played, drew 6 times, and lost 14 times. They scored 35 goals while allowing 44, indicating that there is still space for improvement on defence. Go Ahead Eagles will be looking to avenge their 1-0 Eredivisie loss to Fortuna Sittard in their previous match. That loss occurred after they had won three games in a row in the league. Surprisingly, only one side has scored in each of their last five games.

Go Ahead Eagles are unbeaten in their last four home league games heading into this match. However, they have lost the last four times they have hosted this guests in the Eredivisie. Vitesse, on the other hand, has won all three of its recent Eredivisie away games against Go Ahead Eagles at halftime and full time. However, they have only won one of their last seven league away games. The visitors have a solid track record at De Adelaarshorst, thus we think an away win is likely.

Go Ahead Eagles vs Vitesse – Head-to-Head 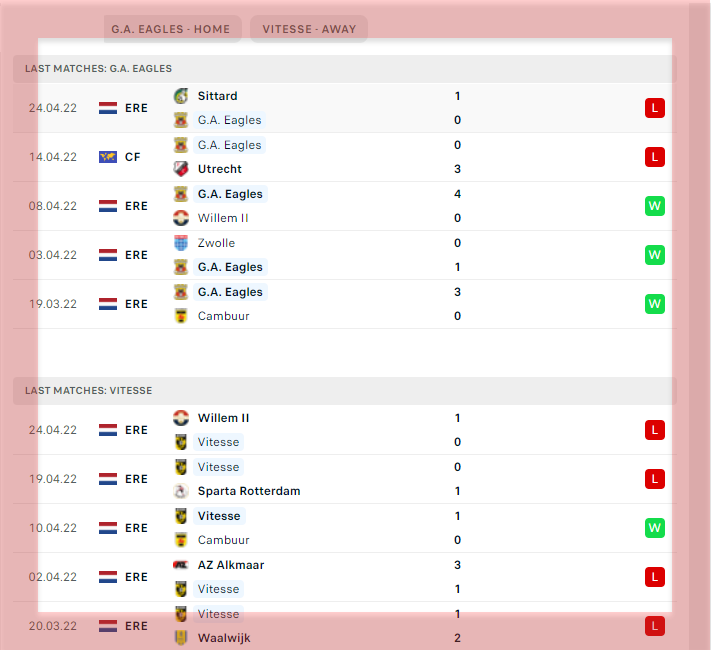