Go Ahead Eagles vs Feyenoord – Preview and Prediction

In their most recent league game, Go Ahead Eagles lost to Nijmegen on the road by a score of 1-0. With that loss, they have now lost three straight league games in a row.

Feyenoord, on the other hand, have been playing well since the start of the season. They were in third place on the table because of how well they played. They have a strong lineup on both offense and defense.

In their most recent league game, Feyenoord and PSV played at home and tied 2-2. With that tie, they have now won their last five league games in a row. After so many games in which they didn’t lose, they will be out of spirit.

In the last five times Feyenoord and Go Ahead Eagles have played each other, Feyenoord has scored 14 goals. Three of the last five head-to-head matches at this site had high scores.

Go Ahead Eagles haven’t won any of their last five home league games. They didn’t win any of their five home games, and they lost four of them by two or more goals. Such a streak will hurt a team like Feyenoord, which is currently in first place, a lot.

Six of the last eight league games Feyenoord has played on the road have been good. On top of that, they have been scoring goals against Eagles at a good rate in recent games.

So, we think Feyenoord will beat Go Ahead Eagles in the Eredivisie match between the two teams on Wednesday.

Go Ahead Eagles vs Feyenoord – Head To Head 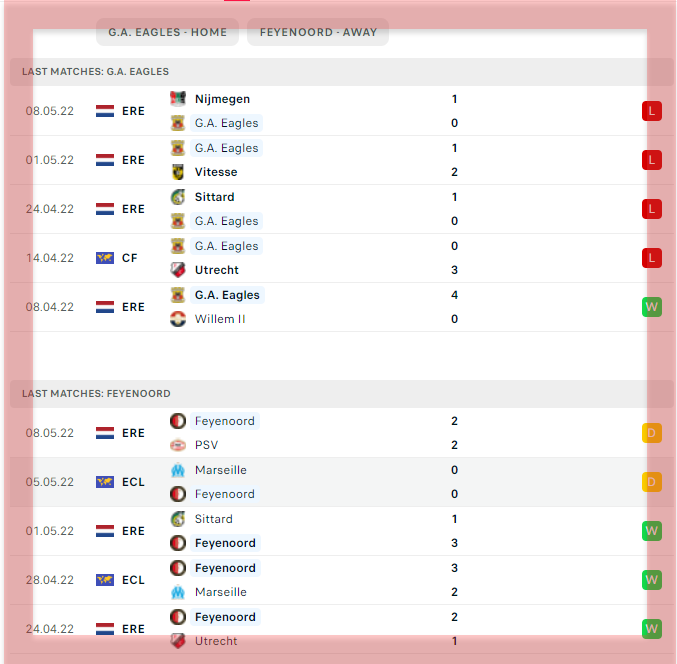