Giresunspor vs Istanbul Basaksehir – Giresunspor’s recent matches have produced varied results. The club has two wins, two ties, and one loss in its previous five games. The team’s form was erratic throughout the season, resulting in them remaining in the bottom half of the league rankings. With 44 points from their matches, they are now 14th in the league rankings. However, the team’s current place guarantees them a spot in the Super Lig for the following season.

Giresunspor’s last match was against Altay. Both clubs scored one goal apiece, and the game ended in a 1-1 FT draw. After a losing trend, Istanbul Basaksehir has regained their winning mindset. The team is now unbeaten in its last six matches, with four of those ending in victories. With 61 points from six matches, they are in fourth place in the league table. The squad has a possibility to play in the Europa Conference League qualifiers based on their current position. If the team wants to keep their current position, they must win the remaining matches. Basaksehir’s most recent match was against Galatasaray, in which neither team scored, resulting in a goalless tie.

The forthcoming meeting between Giresunspor and Basaksehir will be difficult. Basaksehir has gone undefeated in their previous six matches, while Giresunspor has had mixed results.

Giresunspor has gone undefeated in their past five home games. In four of their last five home matches, they have scored over 1.5 goals. Istanbul Basaksehir has gone three games without losing on the road. The team’s performance in away games, on the other hand, has been erratic.

Istanbul Basaksehir is the stronger of the two teams and has a better probability of winning than Giresunspor. Previous head-to-head matchups have all ended with over 2.5 goals. As a result, we may expect the game to end with more than 2.5 goals. 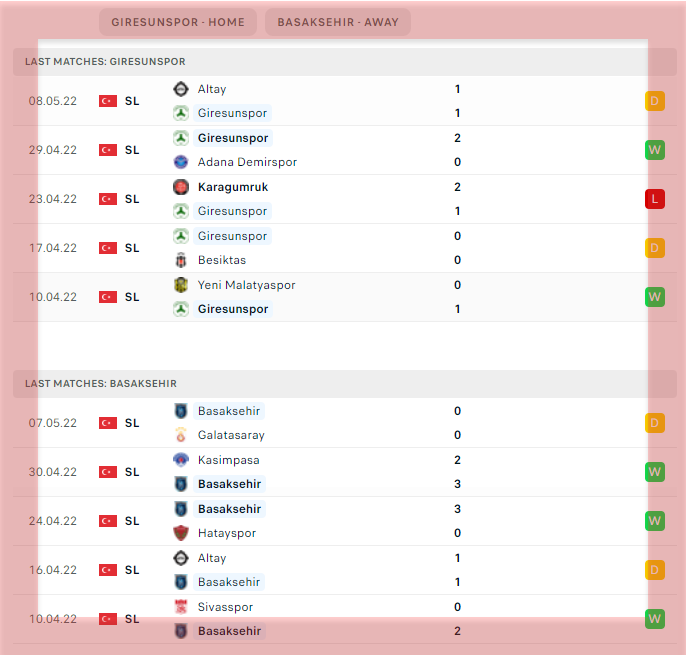