GIF Sundsvall vs AIK – It has been a good run for AIK Stockholm, who have won two league games in a row. Sundsvall are second from the bottom. It’s this Sunday at NP3 Arena, and these two teams are going to play each other.

On the standings, AIK Stockholm has 9 points from 5 games. They are in fifth place with 9 points. They won three times in the league and lost twice. Last season, they came in second, so we should be ready for them to be in good shape at any time. They need to look at their offensive side because they don’t seem to be able to finish well.

It will be AIK’s first game since they beat Djurgarden 1-0 in the Allsvenskan in their last match. This game will come after that. Bartosz Grzelak’s team has scored 7 times in their last 6 games, giving them a goal per game average of 1.17.

Sundsvall, on the other hand, is in 15th place in the standings with just three points from five games. They only won once in the league, but lost four times. It looks like they are having a hard time here, even though they got a promotion from Superettan. They have the most goals allowed in the league with 12.

This season, Sundsvall won their first game. They lost their last league game to Elfsborg by a score of 1-3, even though they had just won. Over their last six games, both teams have scored 21 goals, with eight of them coming from the home team.

They haven’t lost to Sundsvall in any of their 17 games against each other in the Swedish league. They both scored in their last two league games. They beat each other by a 2-1 score in the last league matchup. The only time Sundsvall beat this opponent was in 2020 when they played in a Club friendly.

AIK lost its last two away league games this season. For the last eight league games, they haven’t been beaten by Sundsvall on the road against them.

Sundsvall, on the other hand, hasn’t won a game against AIK in their last 17 league games, which is a terrible record. But they did, however, win the last home by a very small amount.
By the looks of things, the visitors are going to keep their unbeaten streak going this coming Sunday, too. 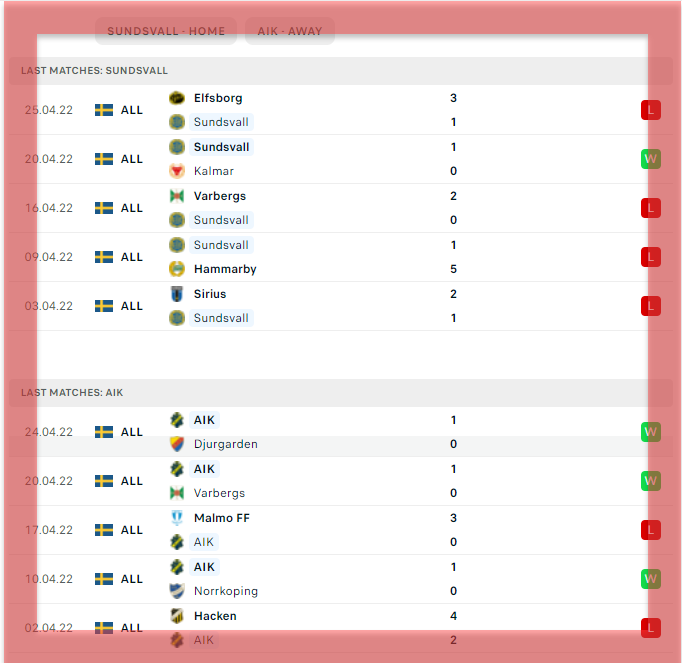