Getafe vs. Real Betis – With five games remaining, the visitors are fifth in the table, four points behind fourth-placed Atletico Madrid, while Getafe are 15th, five points clear of the relegation zone. Getafe is still in danger of relegation to the second division, as they are in 15th position in the table with 35 points from 33 games, just five points above of 18th-placed Granada.

The capital club had dropped dangerously near to the bottom three after back-to-back defeats to Real Madrid and Villarreal earlier this month, but they rebounded with a big 2-0 win over Celta Vigo last time out to open up a lead heading into the final stretch. In their final four league matches, Getafe will face Rayo Vallecano, Osasuna, Barcelona, and Elche in an attempt to prevent relegation to the Segunda Division for the first time since 2016.

The Deep Blue Ones have had a good season in front of their own fans, with 25 points from 16 games, which is a good record considering their current place in the table. Real Betis, on the other hand, will be hosting a squad that has the third-best away record in Spain’s top division this season, with 28 points from 16 games on the road.

Getafe needs the points to keep out of the bottom three, but Real Betis will not be giving them away, as the Green and Whites are vying for a place in the Champions League next season. Manuel Pellegrini’s side has had a fantastic season, and they are presently fifth in the table, four points behind fourth-placed Atletico Madrid and two points ahead of sixth-placed Real Sociedad in the race for European football.

Last Saturday, Real Betis won the Copa del Rey for only the third time in their history, defeating Valencia 5-4 on penalties after a 1-1 draw in Seville.

Pellegrini’s side hasn’t finished in the top four in La Liga since 2005, but they might be six points behind Atletico Madrid heading into this match, as the defending champions will have the opportunity to increase their lead against Athletic Bilbao at San Mames on Saturday night.
Real Betis have a difficult finale to the season on paper, so they’ll have to earn it by playing Barcelona, Valencia, Granada, and Real Madrid in their final four league games.

Real Betis have only lost four league matches on the road this season, but Getafe have won seven of their 16 home encounters. Both teams will be revved up to win all three points, but we’re having trouble separating them here, so we’re going to settle for a low-scoring draw. 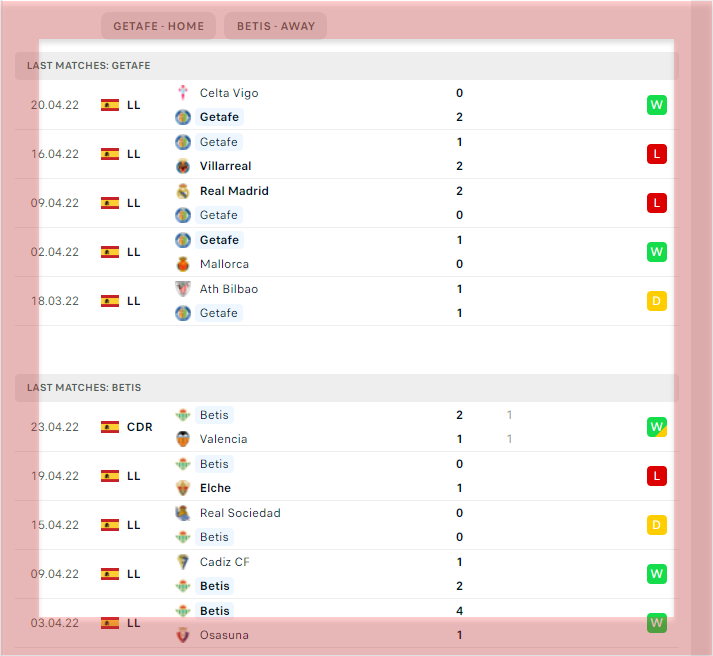