Genoa vs Salernitana – On Sunday afternoon, Genoa and Salernitana will face off at the Stadio Luigi Ferraris, with the lowest two teams in Serie A battling it out.

After a goalless draw away at Roma last weekend, Genoa’s search for their first victory in 2022 continues.

Roma attacker Nicolo Zaniolo was controversially denied a 90th-minute winner after Tammy Abraham was deemed to have fouled Johan Vasquez in the build-up, but VAR proved to be the Rossoblu’s saviour.

Genoa has drawn 11 league matches this season, more than any other side in Serie A, and only Brighton & Hove Albion has drawn more games in Europe’s top five divisions.

Last Saturday, Salernitana missed out on a chance to win their fourth game of the season when they let a one-goal lead slip away twice to draw 2-2 at home against Spezia.

On his debut for his new club, Simone Verdi scored a magnificent free kick into the top left corner in the third minute to put the hosts ahead; however, VAR intervened to award the visitors a penalty in the 12th minute, which was converted by Rey Manaj.

Injury has ruled out Genoa trio Domenico Criscito, Mattia Bani, and Nicolo Rovella, while Leo Ostigard has been suspended following his red card against Roma.

Andrea Cambiaso, on the other hand, has returned from a one-match suspension and might start at left wing-back, with Silvan Hefti on the other flank.

Nadiem Amiri, on loan from Bayer Leverkusen, will look to break into the starting lineup, while Roberto Piccoli will partner Mattia Destro in attack.

Mamadou Coulibaly, Matteo Ruggeri, Andrea Schiavone, and Francesco Di Tacchio are all out for Salernitana while they recuperate from injuries.

After signing a short-term contract with the club earlier this month, Diego Perotti might make his first start, lining up with Verdi and Franck Ribery in an advanced midfield role behind lone striker Milan Djuric.

Genoa vs Salernitana – Head – to – Head 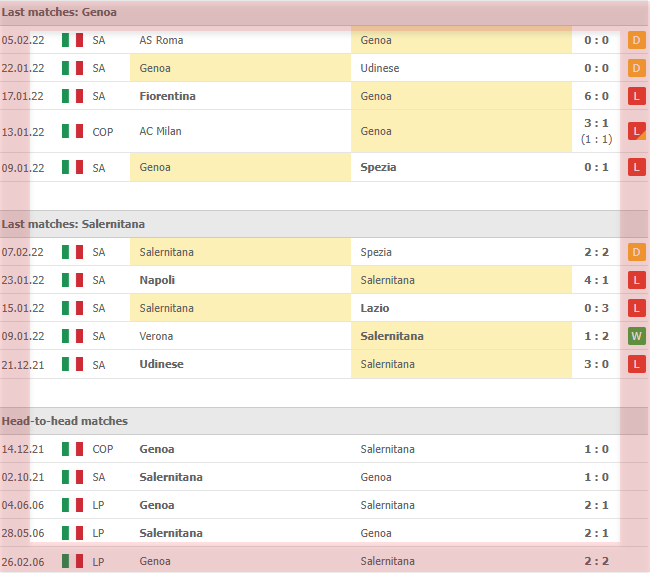