Genoa vs Juventus – Preview, and Prediction

Genoa vs Juventus – Genoa has been one of the poorest clubs in the Italian top division this season, and they are currently ranked 19th out of a possible 20 teams. To avoid relegation, they need a total of four points from their remaining three games.

Given the desperation that the teams above and below them are currently experiencing, it will be incredibly difficult. Furthermore, the team has a weak defence, which has let them down multiple times this season.

Meanwhile, the Old Lady is a past champion of this event, and they have secured a top four position this time.

However, that will not satisfy their egos, and because they have the option of playing without pressure, they will go for third place.

And the fact that they are up against one of the league’s weaker teams certainly helps their cause. On Friday, Juventus will almost certainly win convincingly.

The Old Lady had won their most recent match by a score of 2-0, and they had triumphed in five of the previous six meetings. They had scored two or more goals in each of their previous six matches.

The most recent encounter at the stadium ended in a 1-3 victory for the visitors. On the penultimate day of the season, Genoa was defeated 1-0 by Sampdoria on the road.

They had lost four of their previous five games overall, and 31 of their previous 34 games. It’s also worth noting that they’ve only won four times at this venue since April 2021, two of which came in the Coppa Italia.

On the other hand, the Old Lady, the defending champs, are on a three-game winning streak. They had won 2-1 at home against Venezia the previous week, and had gone undefeated in 26 of their previous 29 games.

The Old Lady is one of just five teams in the competition to have gone four games without losing. In four of their last five games, they have scored two or more goals. In the last 12 months, Genoa has only managed two victories at this site. 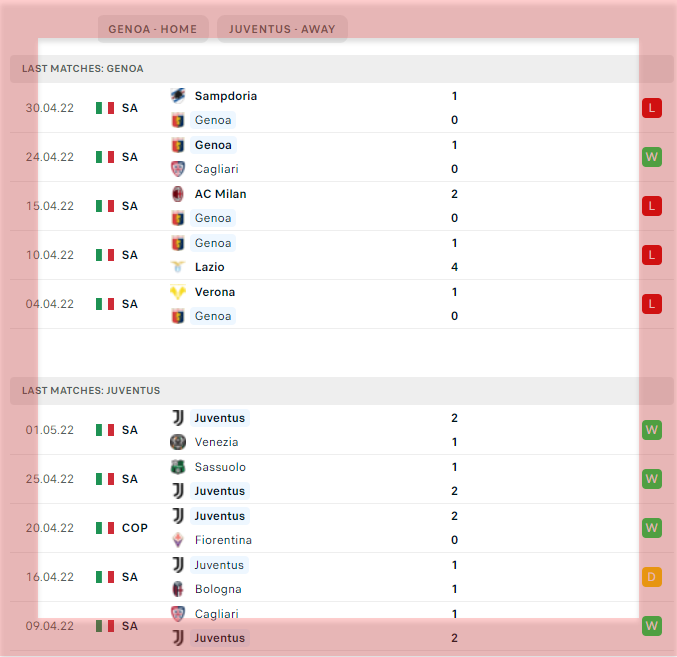