Genoa vs Empoli – preview and prediction – team news, and lineups

Genoa vs Empoli – Genoa is second from the bottom, battling relegation after drawing the last 5 matches in a row. They didn’t win any game this year and the last time they saw a win was 11 games back.

Empoli lost the last 2 league games in a row and after last December, they were denied of all 3 points up to this day. Hoping to turn the tables, Gli Azzurri will travel to Stadio Luigi Ferraris this Sunday to take advantage of the pressured home side.

With 31 points after 27 games, Empoli is in 13th place in the standings. They won eight times in the league, drew seven times, and lost a dozen times. They scored 40 goals while allowing 53, indicating that there is still space for improvement on defense.

Back-to-back league defeats for the visitors came against Sampdoria and Juventus. They’ve been outscored in five of their last six games, allowing opponents to score 13 goals in total.

Il Grifone, on the other hand, is in 19th place on the standings with only 17 points. They only won one of the 27 games they played, drew 14 times, and lost 12 times. Their overall goals to conceded ratio is 22:47, indicating that their defense is far from ideal.

Inter Milan drew Genoa for the fifth time in a row, this time with no margin for error. In five of the last six games in which they have been involved, they have scored fewer than three goals per game. The rival teams combined for an eight-point total, while they only received two from the same. 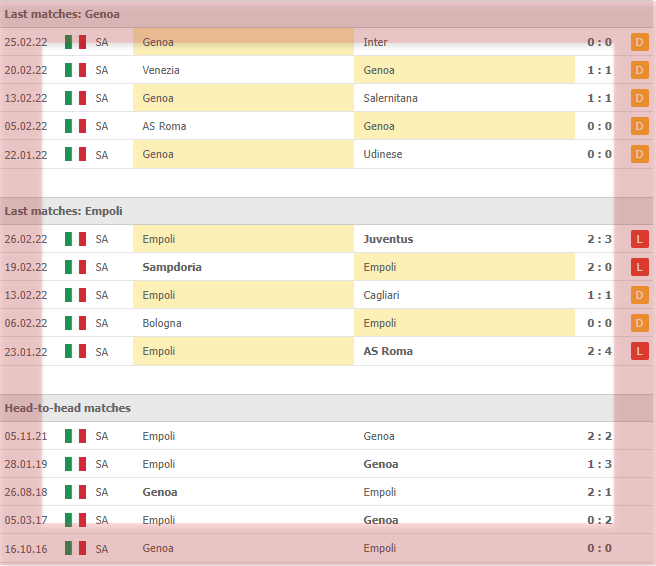