Genoa vs Bologna – Preview, and Predictions

Genoa vs Bologna – Genoa, Italy’s oldest professional football team, was demoted after a 15-season stint in Serie A following a 3-0 loss to Napoli (SA). While the mood in the camp will be gloomy, it might grow even worse if the ‘Grifone’ fail to get points here, putting them in danger of finishing bottom for the first time since 1950/51.

After three wins in their last four games at this stadium (L1), Genoa extended their fight for survival, and while it proved too little too late, it does suggest that they could fancy their chances of escaping the wooden spoon. Genoa has scored three goals after the 85th minute in their last three home games, including a brace in a come-from-behind 2-1 victory over Juventus.

Bologna’s season is nearly over, but a third consecutive 12th-place finish is possible if they win on this trip and Udinese loses to relegation rivals Salernitana. Bologna’s recent form is a concern, as they have only won once in six games (D3, L2) and have conceded seven goals in their previous two.

Only three SA teams have scored less away points than Bologna (15) this season, and they have yet to win on the road (D4, L5), raising concerns about the squad’s confidence. However, their last three away draws have all come against current top-six clubs, and a repeat of the opposite fixture’s result (D 2-2) will make this the first SA season since 1957/58 in which both H2Hs have resulted in draws.

Players to watch: Domenico Criscito will aim to finish his Genoa career on a high note, with three of his past five league goals earning points (W1, D4), all coming after the 85th minute. Marko Arnautovic, who has scored five of Bologna’s past six away SA goals, also did it in the reverse matchup. Genoa has yet to lose in SA this season (W4, D4) after taking the lead at any time. 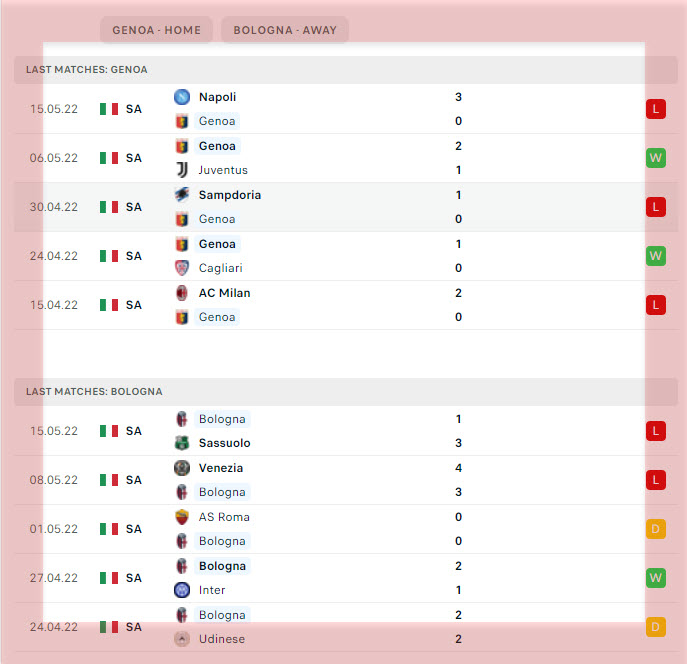