Genk vs Gent – Preview and Prediction

Genk vs Gent – This season, Genk has done well in the Conference League playoffs. The team has played four games so far, and they have won three of them. The fourth game ended in a tie. At the end of the regular season, the team was in the eighth spot, even below Mechelen. But because of their strong play, they have moved up the table and are now ahead of Mechelen. This gives them a chance to get into the Europa League.

The last game Genk played was against Sporting Charleroi. Even though Charleroi scored the first goal, Genk came back and scored three goals to take the lead. The score at the end of the game was 3-2.

The top team in the playoffs is Gent, which is four points ahead of the second-place team, Genk. They have also played well in their games. In the last four games, they have won three and lost one. After losing their first game against Genk, the team went on to win their next three games.

In their last game, Gent beat Mechelen by only a few points. When Mechelen scored in the 89th minute, they were hoping for a tie. But in the last minute, Gent scored the goal that won the game for their team. The score of the match was 1-2 FT.

The last head-to-head match was won by Genk with a score of 0-1 FT. Genk hasn’t won at home against Gent in the last three games. In the last five head-to-head games between Genk and Gent, each team has won twice.

Both Genk and Gent have done well in their recent games. Genk hasn’t lost in its last six games, and Gent has only lost once in its last ten. In most of the games, both teams have scored more than 1.5 goals.

In the playoffs, Genk has already won against Gent. They will also be hoping to win this match. But in most of the games, both teams have scored more than 1.5 goals. So, we can expect more than 2.5 goals to be scored.

Genk vs Gent – Head To Head 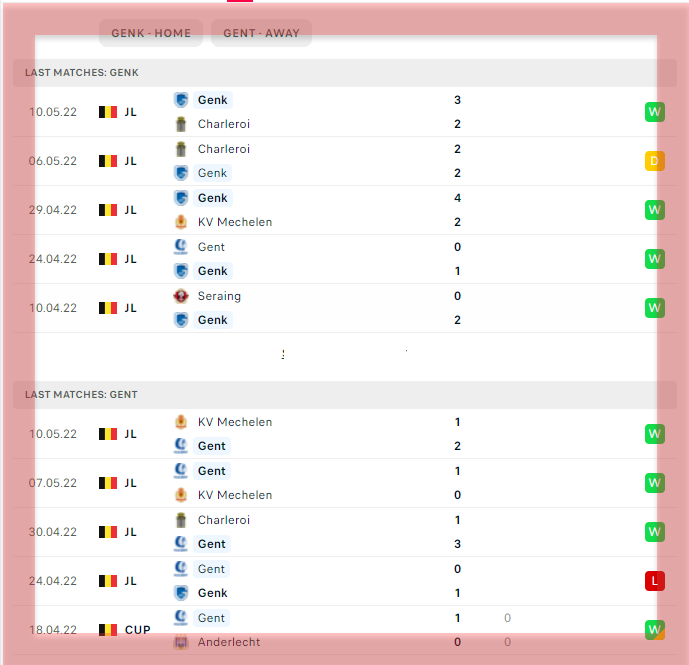