Gaziantep vs Goztepe – Preview and Prediction

Gaziantep vs Goztepe – Gaziantep’s recent matches have revealed that the team is struggling with their form. The club has one victory, three draws, and seven losses in its previous ten games. They’ve also lost their last three games. The team falls further down the league table with each dismal match performance. With 41 points from six matches, they are now ranked 15th in the league.

Gaziantep’s most recent encounter was against Konyaspor. Konyaspor was the first team to score, and they continued to score until the final minutes. Gaziantep only managed to score one goal in the encounter, which resulted in a 4-1 FT loss for Gaziantep.

Goztepe has recently had a string of dismal performances. In the last ten games, they have yet to win. They are currently on a losing streak that has lasted more than ten games. The team’s terrible performance is weighing them down, and they have a slim chance of avoiding relegation. With only 27 points, they are now the second team from the bottom of the league table. Goztepe’s most recent encounter was against Fenerbahce, in which Fenerbahce scored two goals and Goztepe scored none. With a 2-0 FT score, Goztepe was defeated in the encounter.

This season, both teams have performed poorly in their matches, resulting in them being at the bottom of the league table. At the time, both teams are on winless streaks. Goztepe has lost its last 10 games in a row, while Gaziantep has gone three games without a win. In the last four home matches, Gaziantep appears to have gone undefeated. In the last five road encounters, Goztepe has lost all of its games. In addition, they have only won three of their road trips all season.

According to the statistics, Gaziantep is the most probable team to win the match. In recent matches, Goztepe and Gaziantep have both scored and surrendered goals. As a result, we may anticipate both teams scoring in the matches.

Gaziantep vs Goztepe – Head to head 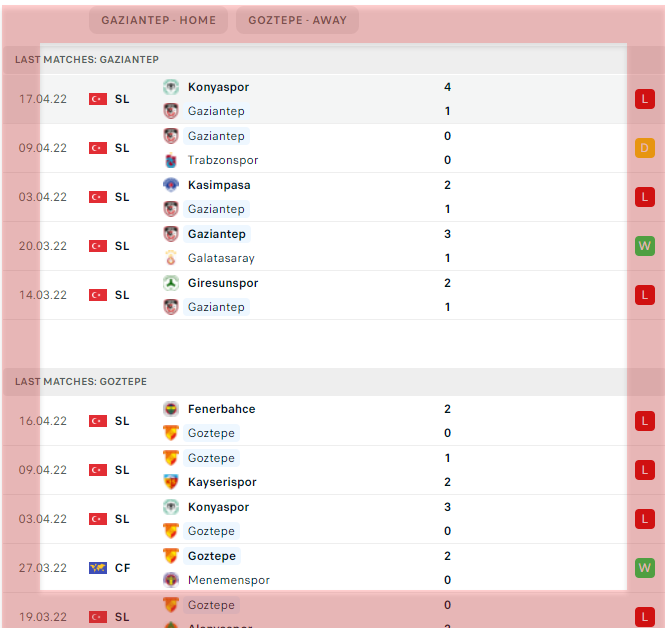