Fulham vs Liverpool – Preview and Prediction

Fulham vs Liverpool – On the first day of the new Premier League season, the Reds will face a freshly promoted team when they travel to Craven Cottage to take on Fulham.

The team led by Jurgen Klopp finished in second place once again last year, while the Cottagers are trying to escape an immediate relegation to the second division.

The ultimate goal for Fulham and Marco Silva this summer is to show that they are no longer a yo-yo squad by staying in the Premier League for more than a year.

Fulham won the 2021-22 Championship with 90 points and 106 goals, 43 of which came from Aleksandar Mitrovic. However, they only won two of their final seven games, which took some of the shine off their trophy.

Manor Solomon, Kevin Mbabu, Bernd Leno, and Andreas Pereira have also joined Silva’s Craven Cottage squad this summer. Bringing in Joao Palhinha from Sporting Lisbon was an outstanding coup in itself, and the allure of the Premier League played a key role in that one.

Even though Benfica scored five goals against them in preseason and they have lost all five of their opening-day top-flight matches the season after their promotion, Fulham are well-prepared to fight for survival this season after victories over Nice and Estoril and a scoreless draw with Villarreal.

Fulham finished their disastrous 2020-21 season 0-for-10 (losing eight, drawing two), but Liverpool fans won’t be happy to learn that their most recent Premier League triumph came against the Reds’ bitter rivals, Chelsea.

While winning both the FA Cup and the EFL Cup is certainly an accomplishment, Liverpool appeared to be on track to make history in 2021-22 by winning all four major trophies when Real Madrid and Manchester City stole the show.

Seeing Reds veteran Steven Gerrard nearly pull off the ultimate final-day upset with his Aston Villa side against Man City before Pep Guardiola’s side came roaring back did damper the atmosphere a bit.

Liverpool’s 2022-23 campaign got off to a winning start with a Community Shield victory over the defending champions, and the club has since won the race to sign Darwin Nunez and convinced Mohamed Salah to sign a new contract until 2025.

Liverpool’s unbeaten run in the Premier League now stands at 19 games. In preseason, they were beaten by Red Bull Salzburg, Manchester United, and Strasbourg. However, Klopp was not averse to putting out squads comprised of second-string and youth players over the summer.

As was alluded to earlier, Fulham’s last Premier League victory came against Liverpool in 2021. That same year, the Cottagers also held the Reds to a 1-1 draw at Craven Cottage. This weekend, however, Liverpool will be looking for their fifth opening-day win in which at least three goals were scored in quick succession.

Fulham vs Liverpool – Head -to- Head 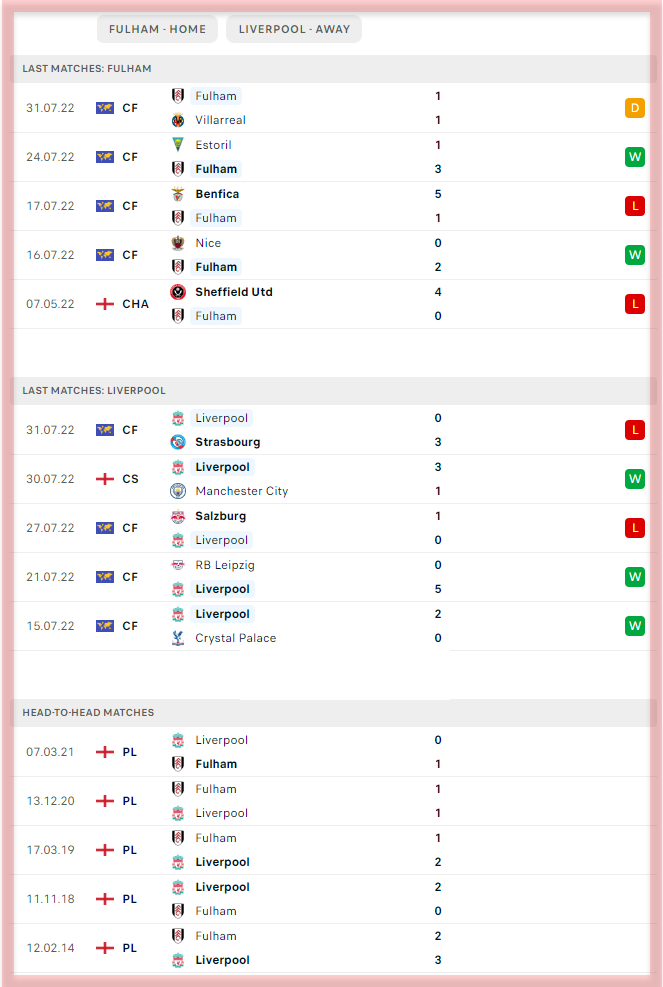