Freiburg vs Eintracht Frankfurt – After losing to VfL Wolfsburg 6-0 in their previous match in Bundesliga 1, Freiburg will be looking to avenge that loss here.

Freiburg had 45% of the possession in that game, made 9 attempts on goal, and none of them was successful. With 12 total shots, 6 of them were on target for Wolfsburg.

Freiburg games have recently become notorious for being exciting matches with lots of goalmouth activity. A total of 21 goals have been scored for both teams over the course of only their last six games (at an average of 3.5 goals per game), with 10 of those goals coming from Freiburg.

Freiburg had won all six of their home league games entering this clash.

Following a 3-0 victory over Schalke in their previous game in Bundesliga 1, Eintracht Frankfurt will enter this contest with momentum.

In that contest, Eintracht Frankfurt had 44% of the possession and attempted 12 goals, scoring three of them. Jesper Lindstrom (21′), Rafael Santos Borré (84′), and Aurélio Buta (91′) scored goals for Eintracht Frankfurt. Schalke 04 made 19 attempts on goal with none of them being successful at the other end.

Goals have been celebrated 20 times in the last six games Eintracht Frankfurt have played, resulting in an average of 3.33 goals per match, demonstrating their participation in successful clashes.

Seven of these goals have been scored by rival teams. In any case, we will just have to wait and see whether or not this pattern will continue in the upcoming game.

Looking at their previous head-to-head matches dating back to 10/11/2019, there hasn’t been much of a difference between the clubs, with Freiburg winning two, Eintracht Frankfurt winning two, and two games ending in draws throughout the regular season.

In total, 20 goals were scored in these matches between the two teams, with 9 goals coming from Freiburg and 11 from Eintracht. 3.33 goals are scored on average throughout a game.

The teams’ most recent league meeting was on Bundesliga 1 Match Day 29 on April 10, 2022, with Eintracht Frankfurt defeating Freiburg 1-2.

On that particular day, Eintracht Frankfurt had 53% of the possession and 1 of their 18 shots were successful. Filip Kosti was the lone scorer for them (54′).

Freiburg’s opponents had 12 shots on goal, two of which were on target. Nils Petersen (69′) and Vincenzo Grifo (27′) both scored goals. Felix Brych served as the referee.

With little separating these two clubs, we believe Eintracht Frankfurt and Freiburg might both score in what appears to be a good matchup.

Checking out the betting prices for the game on the full-time result market, backing Freiburg can be had for 2.5, backing the game finishing all-square is 3.54 & taking a punt on the winning team to be Eintracht Frankfurt gets you 2.7. Those are the most competitive prices on offer at present. 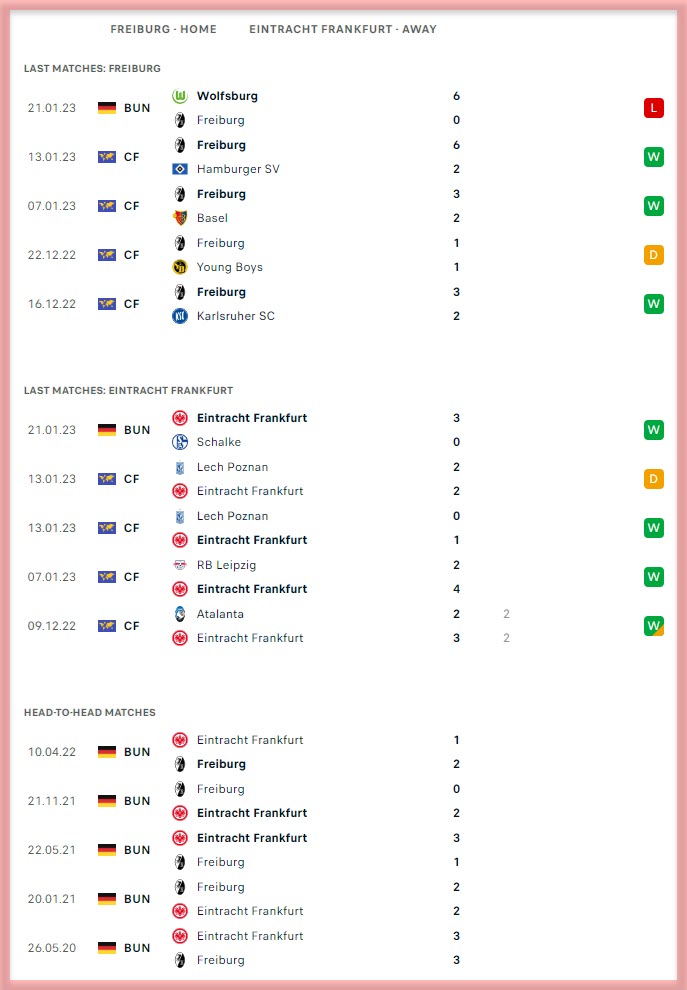