France vs Austria – Preview, and Prediction

France vs Austria – The defending World Cup champions France are already eliminated from contention for a place in the Nations League semifinals. However, they do have the World Cup in December, and they must perform at their very best for that.

They will probably strive for a significant victory over Austria coming Thursday. Not only are the French the reigning world champions, but they also won the previous Nations League.

They have yet to win in the current competition, though, and as of right now, they are ranked last in their group. They scored the fewest goals and conceded the fewest in the group. Furthermore, they only received two points against their name.

They thereby mathematically disqualified themselves from moving on to the tournament’s next round. However, as was already indicated, they are attempting to regain their confidence.

They might put up one of their best tournament performances this Thursday in front of their home crowd. Austria, however, has nothing to be proud of. They have only been able to win once thus far, and they have a long streak of losing performances.

Additionally, they performed extremely poorly in prior head-to-head matches. Considering all of these findings, predict France to win this Thursday with ease.

The last time the French suffered a defeat against this foe was 14 years ago. France hasn’t won a game in the competition yet, although they have won seven of their last eleven games overall and 34 of their last 37 games altogether.

Keep in mind that they have conceded two or more goals in four of their last six games. They also failed to win on eight of their previous twelve road trips, and during those times, they lost two consecutive games. These observations suggest that France will win.

France vs Austria – Head -to- Head 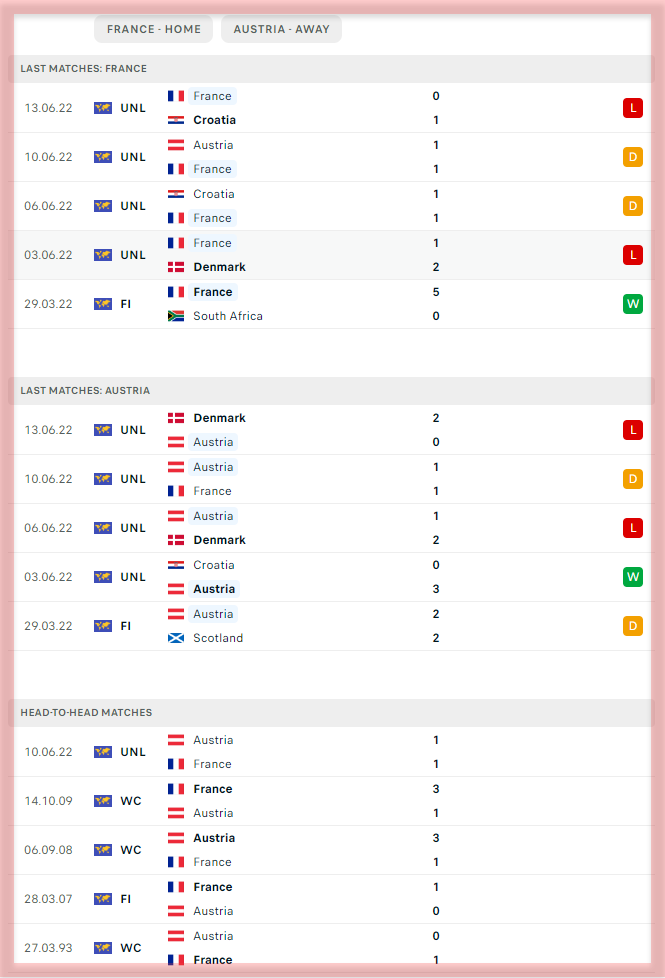