Fortaleza vs Ceara – Preview, and Prediction

Ceara’s Copa do Brasil Round of 16 matchup with Fortaleza begins on Wednesday at Castelao, and the team will be out for vengeance. Last season, Leao do Pici knocked Vozao out of this competition by winning the second leg of their third-round encounter 3-0 after the first leg went 1-1.

Fortaleza’s domestic campaign has been a letdown after finishing in the top four of the Campeonato Brasileiro Serie A last year. For the second year in a row, they made it past the third round of this event by defeating Vitoria 4-0 on aggregate.

In light of their domestic troubles, manager Juan Pablo Vojvoda may be in danger of being fired unless they do well in this competition and the Copa Libertadores.

Fortaleza’s 3-1 win at Castelao versus Sao Paulo in the quarter-finals of this competition in 2021 allowed them to go to the semi-finals after the first leg of that quarter-final finished in a 2-2 tie.

Clube da Garotada’s wing-backs have provided a lot of width and space for them thus far this year in the Copa do Brasil and the Libertadores tournaments.

As well, their center backs have stayed low and made crucial interceptions, while their central midfielders have done a great job controlling half-spaces, both of which have been difficult for them to achieve this year in the Brazilian top division.

Ceara’s defensive form has improved under new manager Marquinhos Santos, who has replaced Dorival Junior and has posted consecutive clean sheets in his two matches in command.

Earlier this month, Fortaleza were reduced to ten men in the 20th minute by Junior, and they took advantage, shooting seven attempts on target in an amazing 1-0 victory, the second of three away wins for them in the Brasileiro Serie A this year.

Both games ended in 0-0 draws, in spite of the new coach’s attempts to play a more attack-minded style. His team failed to create enough overload to isolate their wing-backs in 1v1.

This domestic campaign’s midfielders have done a better job covering those wide parts of the field that were often open in transition thanks to their 4-3-3 formation, which has given them more natural triangles and passing possibilities.

When they beat Tombense 2-0 in the first and second halves of their two-legged tie in the previous round of this competition, they qualified for the round of sixteen for the second time in three years. They have not lost in their previous 12 games in all competitions and have not allowed a first-half goal in six straight outings.

Fortaleza vs Ceara – Head -to -Head 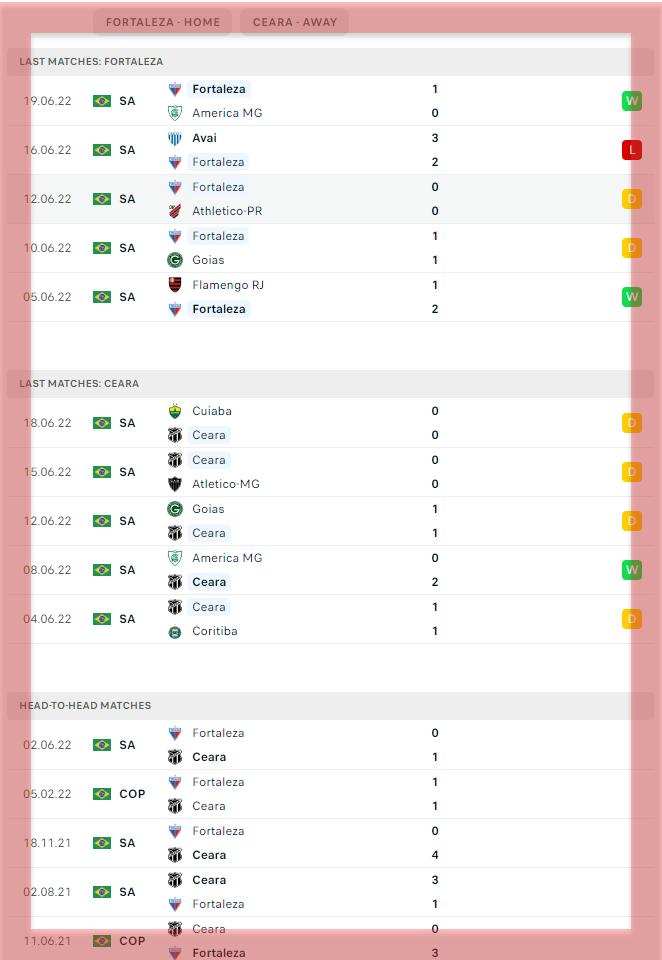