Flamengo vs Goias – Preview, and Prediction

Flamengo vs Goias – The last season’s runners-up have had a tough start to this season’s matches. They have gone winless in their previous four games and have only one win in their last six. With six points from their six matches, they are now ranked 16th in the league table. On the basis of league points, they are on par with the first team in the relegation zone. Flamengo is hoping to reclaim their form and climb the league in the following games.

Flamengo’s most recent match was against Ceara, in which both clubs scored two goals each, resulting in a 2-2 FT draw.

In recent contests, Goias has gradually improved their performance. After a shaky start to the season, the club has won two straight matches and held clean sheets in both. With eight points, the squad is now ranked 13th in the league rankings.

Goias’ most recent match was against Santos, in which Goias scored one goal and Santos scored none. The match resulted in a 1-0 FT victory for Goias.

Flamengo won their last meeting with a 0-3 FT score. Flamengo has won the last two head-to-head meetings. In the last six head-to-head matchups, Goias has failed to win.

The last season’s runners-up have been struggling in recent contests. In their last four games, they have failed to win. Goias has won its previous two matches in a row and has kept two clean sheets in the process.

Flamengo’s home matches have yielded varied outcomes this season. The team has won one match, drawn one match, and lost one match out of three (1-1-1). Goias has lost its first two road games of the season, but won their most recent away match.

According to the statistics, Goias will most likely win or draw this match. We should predict the match to end with under 2.5 goals because both teams have scored under 1.5 goals in their previous matchups. 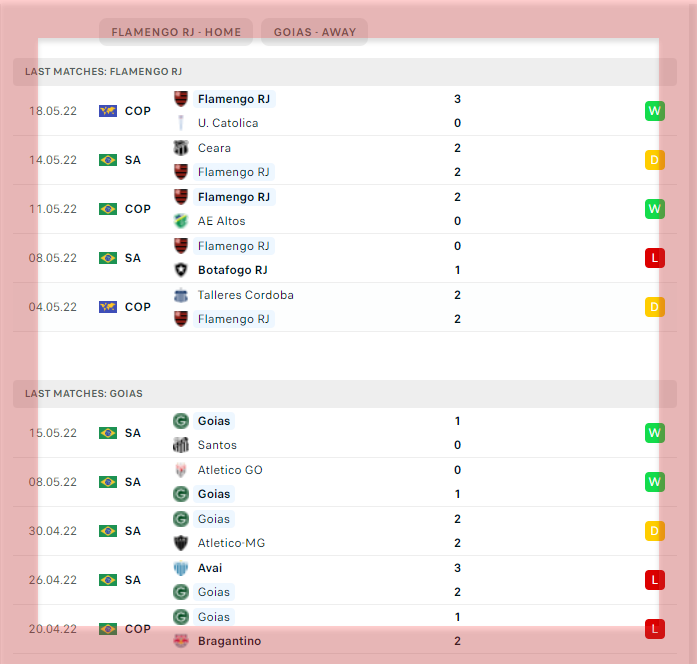