Flamengo vs Catolica – Preview, and Prediction

Flamengo vs Catolica – On Tuesday, Flamengo will face Universidad Catolica at the Estadio do Maracana, hoping to secure a place in the Copa Libertadores knockout stages. The visitors, who are presently in third place in the standings, have failed to win either of their past two group matches and will look to break their losing streak in order to keep their qualifying hopes alive.

Flamengo struggled to get off to a good start in the new Serie A season, losing the lead twice before drawing 2-2 with Ceara at the Arena Castelao on Saturday.nWillian Arao, a 30-year-old midfielder, scored either side of Stiven Mendoza’s 26th-minute equaliser to give the visitors a first-half lead, but substitute Nino Paraiba equalised in the 91st minute to force a draw.

Paulo Sousa’s side has now failed to win in each of their previous four league games, with only one win and six points from six games thus far. They will, however, be proud of their performance in the Copa Libertadores, where they have won three and drawn one of their first four games ,Flamengo suffered a heartbreaking defeat in last year’s final, losing to Palmeiras in extra time. They presently lead Group H, needing only one point from their final two games to advance to the next round.

The Rubro-strong Negro’s continental showing has been aided by a strong showing at the attacking end of the pitch, where they have the tournament’s second-best goal scoring record with ten goals scored so far. Universidad Catolica, on the other hand, has struggled to produce results in the Copa Libertadores, scoring four points in four games to finish third in the group.

However, after defeating Union La Calera 3-0 in the Primera Division last Friday, they will feel more confident in facing their Brazilian opponents. Fernando Zampedri’s second-half brace and Felipe Gutierrez’s 82nd-minute strike gave La Catolica their sixth league win of the season in front of a crowd of 14,000 at the Estadio San Carlos de Apoquindo. Prior to that, the Chilean team had gone five games without a win in all competitions, drawing two games and losing three, scoring four goals and conceding ten.

Flamengo have gone undefeated so far this season and will be hoping to advance to the knockout stages. Meanwhile, Universidad Catolica has struggled to produce results, with only one win in four games. We believe the Brazilian team will win all three points and inflict even more anguish on the visitors. While Ariel Holan’s team will aim to win consecutive games for the first time since February in order to keep their prospects of reaching the knockout stages alive, they will face Flamengo at the Maracana, where they have lost both of their previous visits. 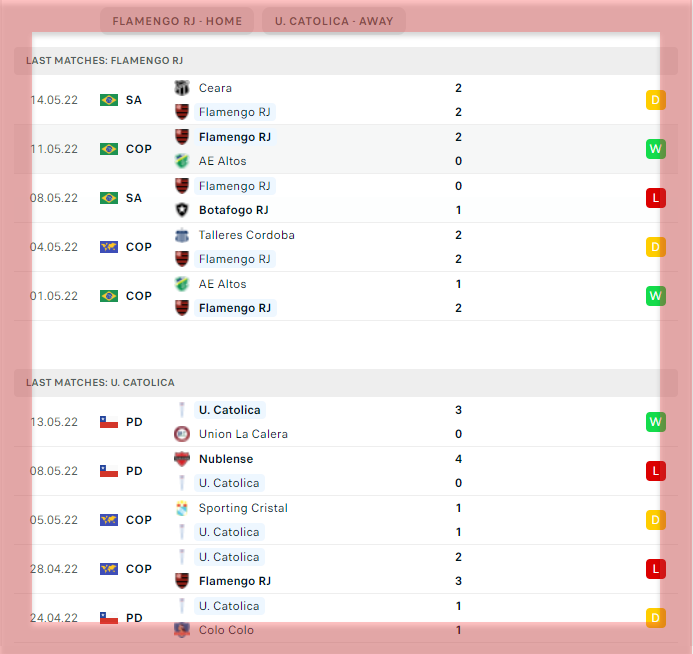