FK Haugesund vs Bodo/Glimt – After a string of losses at the start of the season, Haugesund has been on a winning streak in recent games.

Haugesund have lost their first four matches in a row. Their recent encounters have seen an improvement in their performance, with two wins in a row.

With six points, the squad is now ranked 14th in the league rankings. Odd played Haugesund in their last encounter.

Haugesund scored four goals in the encounter while Odd scored none, resulting in an 0-4 FT victory for Haugesund. So far, Bodo/Glimt have performed admirably in their bouts.

Only once has the team lost in its previous matches. The team began the season on a three-game winning streak.

The team has also managed to secure draws in their last two outings. So far, the team has won two, drawn three, and lost one of its matches.

The club is currently in seventh place in the league rankings with nine points from their matches. Bodo/last Glimt’s match was against Tromso. Both clubs scored one goal apiece, and the game ended in a 1-1 FT draw.

Both Haugesund and Bodo/Glimt have three wins from their last ten matches. Haugesund’s recent form has improved, with two consecutive clean sheet victories in the last two games.

They’ve also scored at least 1.5 goals in each match. Despite the fact that Bodo/Glimt has not won in their last three matches, the team should not be underestimated.

They can return to their winning mindset at any time. The first two of Haugesund’s three home matches this season ended in defeat, while the last match resulted in victory.

So far, Bodo/Glimt has only gone on two road excursions, winning one and losing the other. With Haugesund on a winning streak and Bodo/Glimt having three draws in six games, we can anticipate Haugesund to win or tie this match.

Haugesund has scored at least once in the first half of each of their encounters and is likely to do so again in this one. 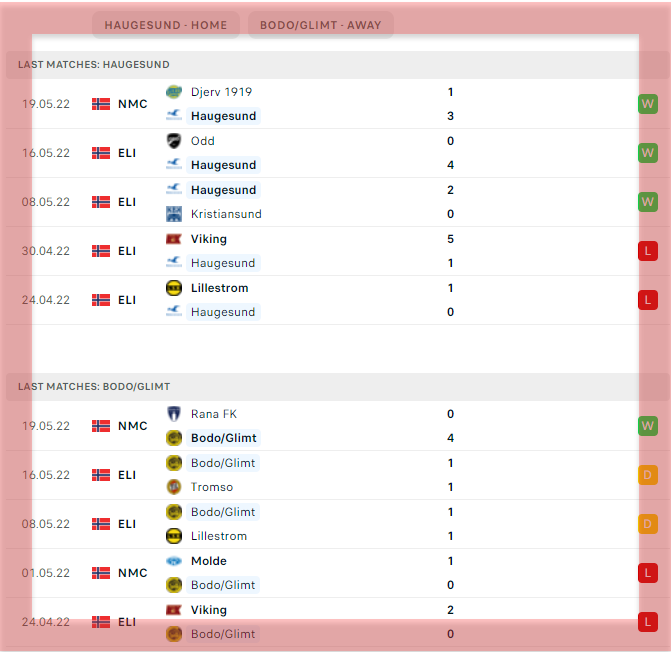