Fiorentina vs Roma – Preview, and Prediction

Following a 1-1 draw in the first match on English soil, the Italian team advanced 2-1 on aggregate. Tammy Abraham was the game’s difference maker, scoring the game’s sole goal in the 11th minute at Stadio Olimpico.

Before this encounter, Jose Mourinho’s side had gone four games without a win in all competitions. The Portuguese coach is pleased with his team’s recent defensive performances, particularly against Brendan Rodgers’ Leicester City on Thursday.

On Monday night, Roma will face top-half rivals Fiorentina at Stadio Artemio Franchi in the final and most thrilling encounter of Serie A Matchday 36.

Fiorentina has dropped out of the top six in Serie A after losing three consecutive games. It included humiliating defeats at the hands of Salernitana (2-1 away) and Udinese (0-4 at home).

The primary issue for head coach Vincenzo Italiano right now is the absence of cutting edge in his team’s attacking line, as Fiorentina has only scored once in their last four games across all competitions.

Roma is coming off a five-game winning streak against Fiorentina, and In four of the last five head-to-head meetings between the two teams, we’ve seen the Over 2.5 goals FT & Both Teams To Score option.

This season’s run includes a 3-1 win over Roma at the opening of the season. Both sides have recently struggled to score goals, but this rivalry has always produced high-scoring games.

We predict one here, and at 1.66 odds, we think both teams to score is a good bet. When it comes to the outcome, the draw appears to be the best value option at 3.30 odds, given that neither team has won in the previous three Serie A rounds. 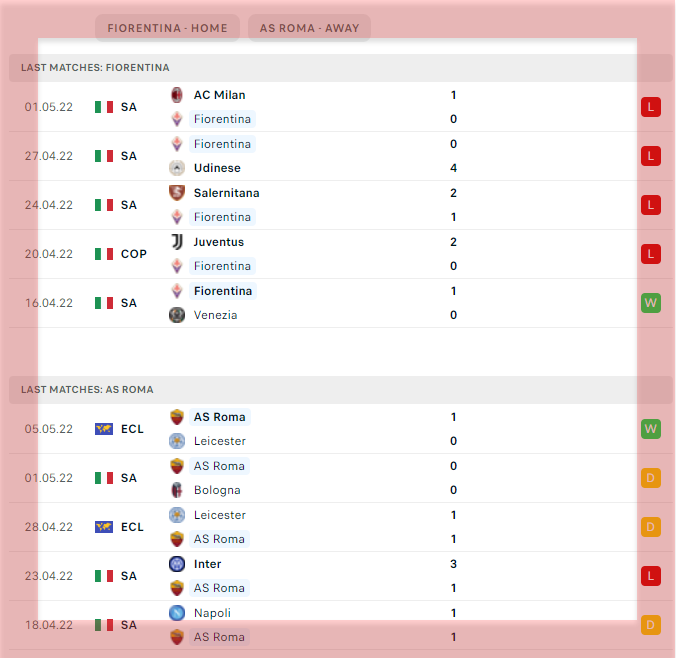