Finn Harps vs UC Dublin – Finn Harps have struggled to win games this season. The team has lost in more games than it has won and drawn in combined.

Their dismal play has pushed them to the bottom part of the league table, where they are currently the first team in danger of relegation.

The team has two wins, two ties, and six losses in its previous ten games. So far, Finn Harps has only ten points from their games.

Finn Harps’ most recent encounter was against Shamrock Rovers. Shamrock Rovers seized the lead in the 17th minute of the game and went on to score additional goals in subsequent games.

For the rest of the evening, the team remained in the lead. Finn Harps only scored one goal in the game, and the game ended in a 3-1 FT loss for Finn Harps.

Since the beginning of the season, UC Dublin has struggled in their games. They have failed to win any of their matches.

Three of the team’s last ten matches have ended in a draw, while the remaining seven have ended in defeat. Dublin’s terrible form has landed them in last place in the league table, with only five points.

Dublin’s last match was against Dundalk. Both teams scored two goals in the encounter, which resulted in a 2-2 FT draw.

The previous h2h concluded in a 0-0 draw, and under 2.5 goals have been scored in the last three head-to-head meetings.

Both Finn Harps and Dublin have struggled in their recent meetings. So far, Finn Harps had only one win from their home matches.

Their six-match losing record came to an end with the victory in their penultimate home match. Dublin, on the other hand, is yet to win a game on their travels.

Only one of their seven encounters has ended in a draw, with the other six ending in defeat. UC Dublin has a better probability of winning the match than Finn Harps.

Even though the teams lost their matches, they contributed to the final score in the majority of them. As a result, we may anticipate the game ending with both teams scoring. 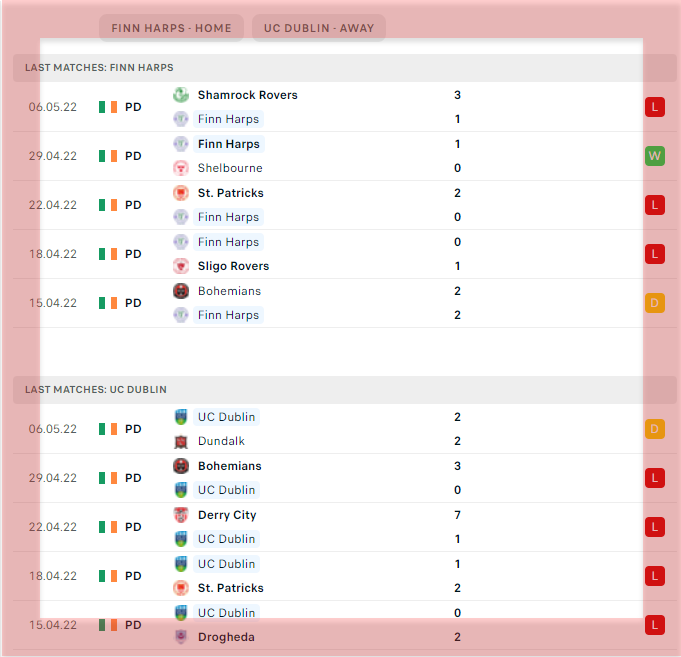