Finn Harps vs Shelbourne – Both teams have lost their last two league games and will be looking to flip the tables this time. Finn Harps, who are fighting for relegation, will play Shelbourne at Finn Park on Friday.

With 12 points after 12 games, Shelbourne sits in eighth place in the standings. In the league, they won three times, drew three times, and lost six times.

The visitors are only five points clear of relegation, but they have lost three of their previous five league games. They have only scored 10 goals so far and need to improve their attacking side.

Shelbourne will be hoping for a better result here after a 1-2 league setback to Dundalk in their previous match. Three or more goals have been scored in five of the past six games involving them.

Finn Harps, on the other hand, is in 9th place on the table with only 7 points. They only won one of the 12 games they played, drawing four times and losing seven times.

They have gone six games without a win in the league and have now lost their last two. Their troubles on the defensive end of the field, where they have conceded 21 goals thus far, have also been a major reason.

Finn Harps were defeated by St. Patrick’s Athletic 0-2 in the Premier Division last time out. In each of their past six games, their defense has been breached, resulting in 12 goals being scored.

Finn Harps have won both of their league games against this opponent, and however, they are yet to win a game at home this season. They even lost their last two home games.

Shelbourne, on the other hand, is sure to score today, since they have scored 6 goals in their past five games and have netted in their last five games.

Furthermore, they have won all of their games this season while on the road. As a result, we believe that a Double Chance for Shelbourne is the safe bet. 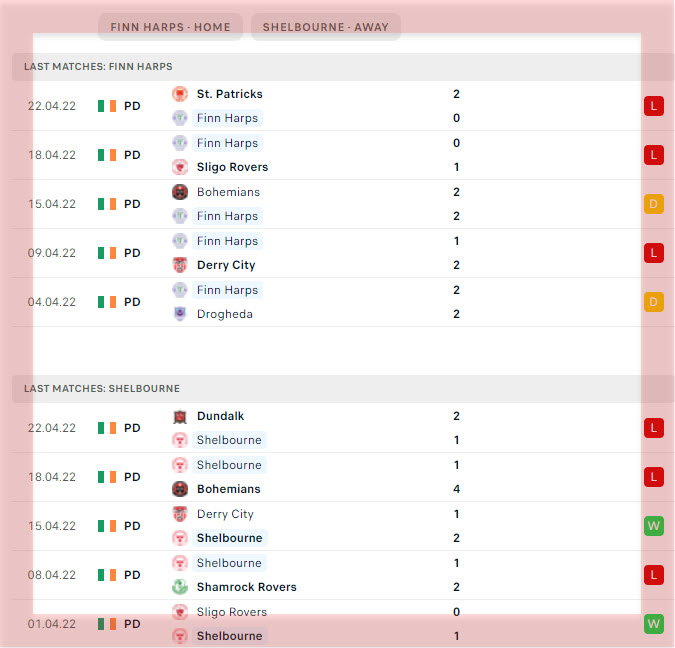