Finland vs Romania – Preview, and Prediction

Finland vs Romania – On Friday night at Helsingin Olympic Stadium, Finland and Romania will face off in a crucial fifth-round matchup in Group 3 of the UEFA Nations League B.

The two teams are currently out of contention for the group’s top slot because they have let their supporters down thus far in the campaign. Instead, how their meeting turns out will probably determine whether team is demoted to League C in the upcoming tournament.

In the previous game, both teams had terrible defensive showings. Finland lost a 1-2 lead to Bosnia and Herzegovina in June after giving up two goals by Edin Dzeko in Zenica. After losing 1-0 to Romania earlier in the tournament, it was their second consecutive loss. Speaking of the game, it was Romania’s lone victory during the campaign as the squad under Eduard Iordanescu lost the other three games with a combined goal differential of 0-6.

Just after the previously mentioned victory over Finland, Romania put on by far its worst performance of the whole tournament. In the previous round, they suffered a devastating 0-3 home loss to Montenegro, giving up all three goals to the same man (Stefan Mugosa).

With only two shots on goal throughout the entire 90 minutes of play, the Romanians did little to threaten their opponents at the other end.

Romania, who has never lost a football game to Finland, will heavily rely on tradition. In the previous 14 meetings with Finland, Romania has won 9 and tied 4 of the games.

In eight out of their previous nine meetings, there were fewer than three goals scored. In their first four Nations League contests, Romania has only managed one goal. One of Finland’s key innovators, Robin Lod, who was unable to report for duty due to injury, will be missed. Knowing the H2H history, the Under 2.5 goals FT with odds of 1.66 must be the play.

At 2.20 odds, Finland is the favorite to win the match. The Finnish team has fared better in the recent qualifying rounds than the Romanian one. Finland earned four of a possible six points from its two home games so far in this campaign, out of a possible six.

Finland vs Romania – Head To Head 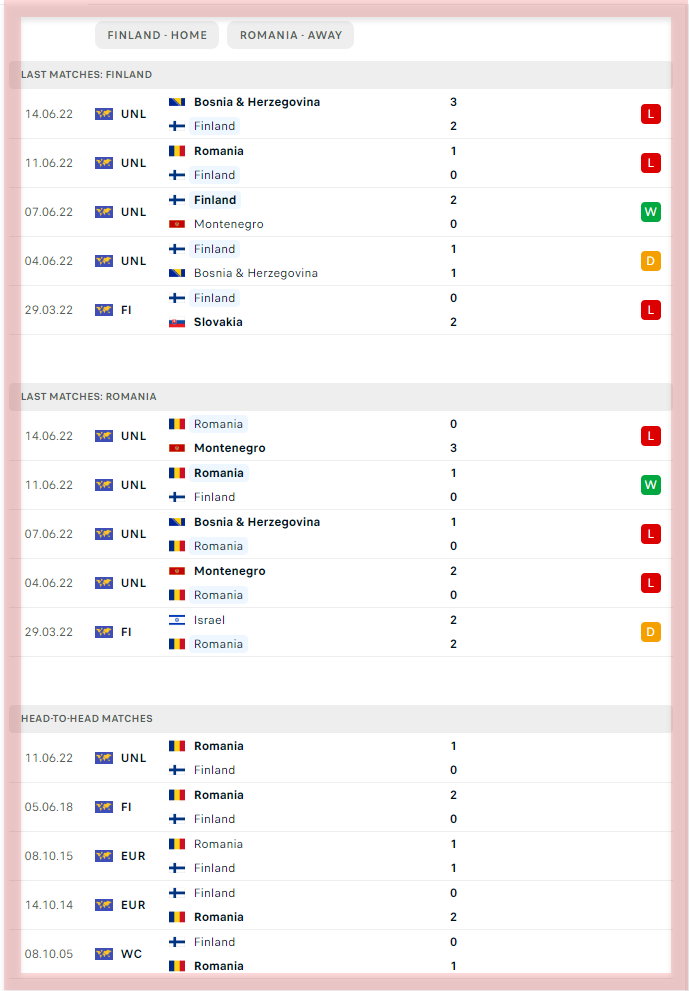