Fenerbahce vs Umraniyespor – Preview, and Predictions

Fener managed to come second in the previous season despite having a very difficult time the entire time thanks to a strong conclusion to the season.

Now that renowned Portuguese manager Jorge Jesus has a number of fresh and skilled players at his disposal, they are prepared to attack the crown.

Fenerbahce has been extremely active in the market this summer, as usual. We wish to highlight some of the team’s many arrivals, including Diego Rossi from LAFC, Joao Pedro from Cagliari, Luan Peres from Marseille, and Emre Mor (from Karagumruk).

The new additions didn’t matter much, though, as Fenerbahce was eliminated from the Champions League in the second qualifying round after losing to Dinamo Kiev in extra time after two consecutive 1-1 draws.

They took on Slovacko of the Czech Republic in the first leg of the third qualifying round of the UEFA Europa League on Thursday, and head coach Jorge Jesus is set to change up the starting eleven for this match against Umraniyespor.

Despite this, Fenerbahce remains the clear favourite in this matchup because they will play the top-flight newcomers tomorrow.

By finishing second at the end of the previous 1. Lig season and being tied on points with the champions Ankaragucu, Umraniyespor secured its first Super Lig promotion.

There has only ever been one previous opportunity for these two teams to play one another, and it occurred in the Turkish Cup’s final 16 games during the previous year’s 2018–19 campaign.

Surprisingly, Umraniyespor defeated Fenerbahce twice by the score of 1-0 to go to the quarterfinals. Regardless of who obtains the ball first in this match, Fenerbahce ought to be huge favourites to win.

There is currently just too much of a qualitative gap between the two outfits. At odds of 2.00, we favour the home team to win by two or more goals, and at odds of 1.60, we like the over/under of 2.5 goals. 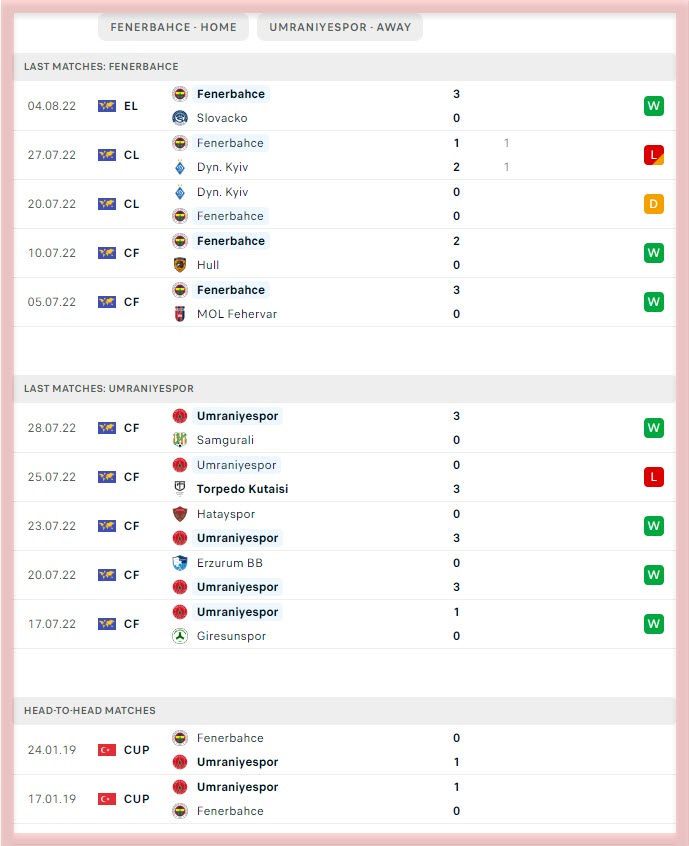