Fenerbahce vs Slavia Prague – Fenerbahce, the Turkish giants, will be looking for a first-leg edge when they face Slavia Prague in the Europa Conference League playoff round.

Fenerbahce finished third in Group D, behind Eintracht Frankfurt and Olympiacos, with just six points from as many matches in the Europa League, and were subsequently relegated to the Europa Conference League playoffs.

The Yellow Canaries’ domestic play has been erratic since learning of their European fate in December, with four wins, four draws, and four losses in their previous 12 games.

Fenerbahce bounced back from a 1-0 Turkish Cup quarterfinal loss at home to Kayserispor with a 2-1 league win over 10-man Giresunspor over the weekend, with goals from Enner Valencia and Dimitris Pelkas.

The Stitched lost two of their first three group games, but they turned things around with a 1-0 victory over Maccabi Haifa and two score draws against Feyenoord and Union Berlin.

Since then, Jindrich Trpisovsky’s team has been battling for first place in the Czech First League alongside Viktoria Plzen and Sparta Prague. Slavia — the current holders – are tied on 51 points with Plzen after 21 games, but their better goal difference puts them at the top of the table.

Mesut Ozil, the Fenerbahce playmaker, has returned to first-team training this week after a time with COVID-19, and the 33-year-old will be in contention to start on Thursday.

However, due to injury, the hosts will be missing Luiz Gustavo (calf), Irfan Kahveci (shoulder), and Serdar Dursun (fractured cheekbone).

Miguel Crespo served a one-match domestic suspension over the weekend, but the 25-year-old is expected to return to the starting lineup ahead of Mert Hakan Yandas, where he will join Jose Sosa and Miha Zajc in central midfield.

Slavia Prague revealed this week that talented midfielder Nicolae Stanciu has left the club to join Chinese Super League side Wuhan Three Towns FC, where he has scored 14 goals in all tournaments this season.

Lukas Masopust or Aiham Ousou could be obliged to play right-back in place of the suspended Alexander Bah, while injuries have ruled out Jan Boril, Laco Takacs, David Hovorka, and Jan Kuchta. 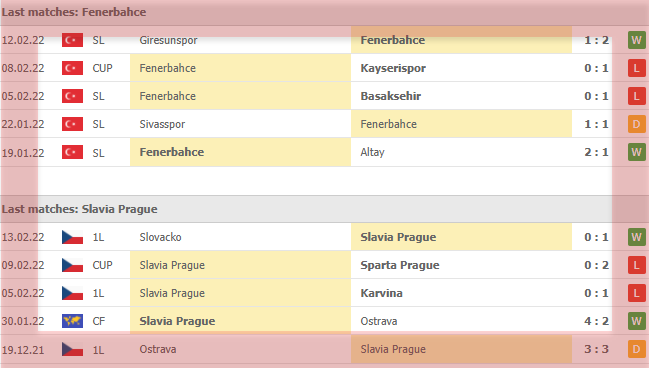