Fenerbahce vs Alanyaspor – Preview, and Prediction

Fenerbahce vs Alanyaspor – Sunday’s Super Lig matchup between Fenerbahce and Alanyaspor will take place at Ulker Stadium. The past season has seen Alanyaspor in outstanding form. They had placed fifth in the standings, missing out on every European competition by just one point.

After a sluggish start brought on by back-to-back losses, the team is now finally heating up. After defeating Ankaragucu 2-1 in the Super Lig, they will be seeking to improve on that performance. Fenerbahce, meanwhile, dominated the competition to take second place on the previous Super Lig table. They had scored the most goals in that season, ignoring the top scorers.

From where they left off in the previous season, they have continued. In their 3-3 home draw with Umraniyespor in the opening game, the Yellow Canaries shown some of their offensive potential.

Since then, they have won three league games while scoring a tonne of goals. Jesus can be pleased with the season-opening efforts of his team’s offensive line. Alanyaspor had gone on a separate 2-match losing streak and were winless in 5 of their last 8 overall road trips. They have conceded a total of 5 goals in their previous 3 road games before this.

Fenerbahce, on the other side, had won 9 of the prior 10 home games without losing. Over the course of their previous 10 home games, they enjoyed two distinct winning streaks of four and three games.

Remember that they have 15 goals in total in their previous 5 home games. All things considered, we anticipate a successful performance from Fenerbahce on Sunday.

Fenerbahce vs Alanyaspor – Head To Head 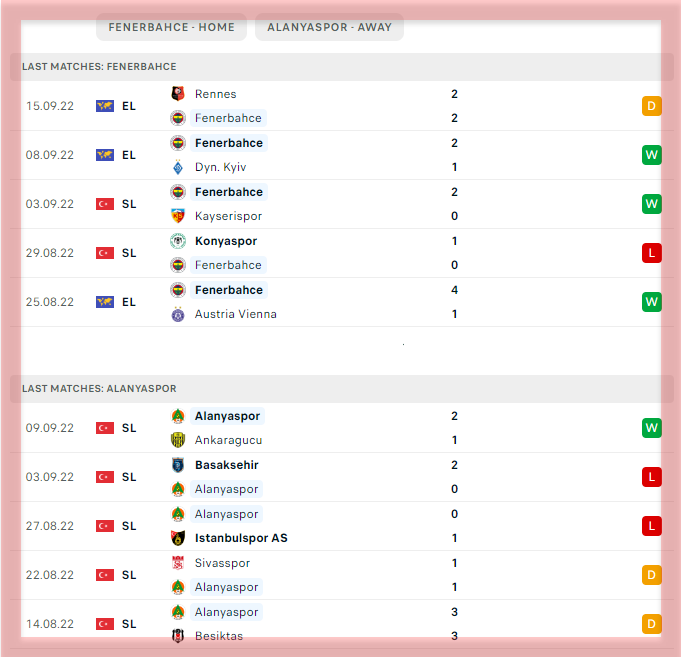