FC Zurich vs Lausanne – This could be one of the most pointless games in the Swiss top league so far this season.

Zurich has already won the championship, and they’ve been on a very exciting run lately. They are scoring goals at an impressive rate, and they can’t be stopped at home.

Lausanne, on the other hand, is at the bottom of the table, and their relegation was clear from the start. The players will have no desire to play in the last three games, and it will be a living hell for them to have to go on the road to play the newly crowned champions.

It goes without saying that Zurich is the clear favorite on Wednesday at their own stadium.
The first time these two teams played, Zurich won 2-0. They have won their last three games. In their last six games, they had scored a total of 15 goals. Only once in the last 21 years have the home team lost at this stadium.

Zurich has won their last four games, and in that time, they have scored 11 goals. Also, keep in mind that they have only lost once at home in the past year, and that they scored five goals in their most recent home game.

On the other hand, Lausanne hasn’t won in three games, and in two of those games, they gave up three or more goals. They hadn’t won in 21 of their last 23 games overall, and during that time, they went on a 10-game losing streak.

Taking these things into account, champions Zurich should win by a lot. 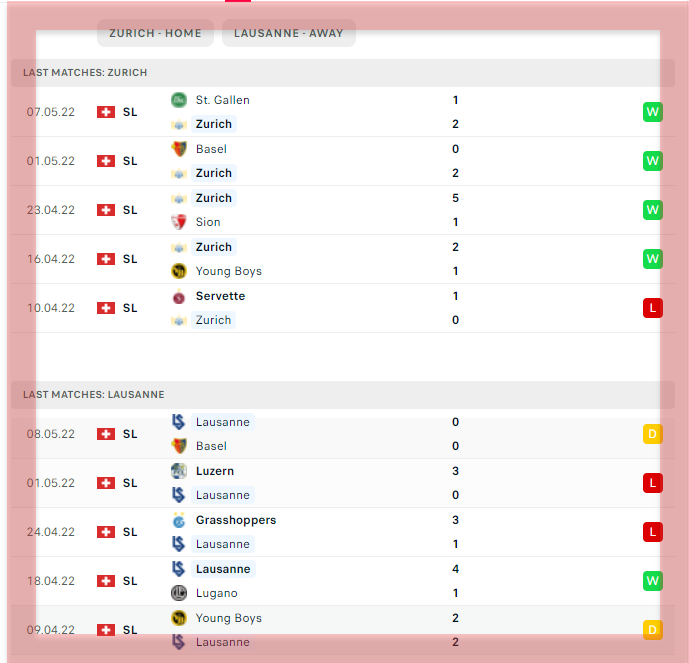