FC Zurich vs FC Luzern – The Swiss Super League’s last round begins this Sunday, with Zurich hosting relegation-threatened Luzern. At Letzigrund Stadion, these two teams will square off.

With 76 points from 35 games, Zurich sits in first place in the Super League. They won 23 games in the league, drew seven times, and lost five times.

Since they are 17 points ahead of second-placed Basel, the hosts have already been crowned Swiss champions. They have one of the greatest attacking teams in the league this season, scoring 76 goals.

The hosts fell 1-2 to Lugano in their last game, breaking a five-game unbeaten streak in the league. Zurich seems unconcerned about the game and has even secured a Champions League qualifying ticket for next season.

Luzern, on the other hand, is in ninth place on the standings with 37 points. They won eight of the 35 matches they played, tied 13 times, and lost 14 times.

They have just regained their form, but a win here will not save them from relegation, therefore the visitors must also lose their final game.

Luzern are coming off a 2-2 draw against Young Boys in the Super League. Their troubles on the defensive end of the field, where they have conceded 62 goals thus far, have been a major factor, despite their good play on the offensive end, where they have scored 49 goals.

After playing 17 home games this season, Zurich has only lost once. They also come in with a four-game winning streak at home. It’s probable we’ll see a few more goals here, since they’ve scored in each of their last five games, totaling 12 goals.

Meanwhile, Luzern has been in excellent form, having gone four games without losing. They must win this game because it is their last chance to avoid relegation.

We believe a home win is in the cards, as the hosts have won their past three home matches in a row, keeping two clean sheets along the way. 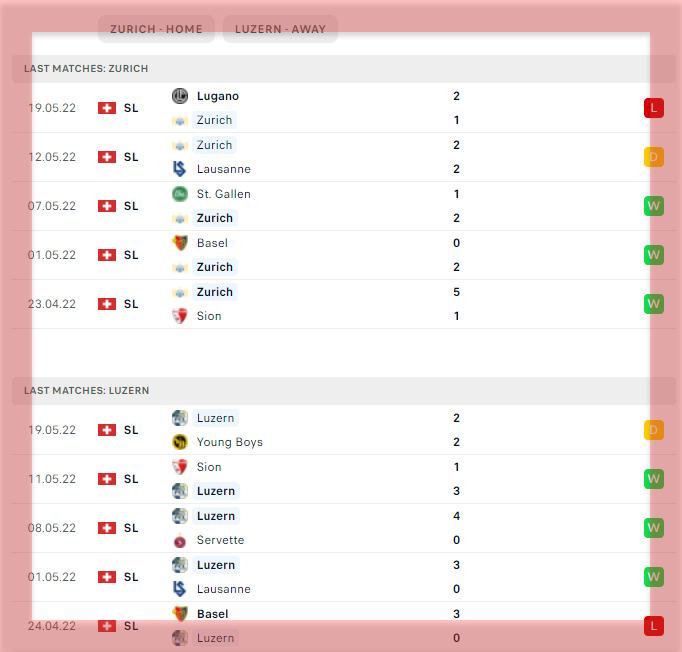