FC Zürich vs Arsenal – Even though Zurich are the current Swiss top flight winners, they haven’t played like their usual selves this season. Except for the loss to Manchester United, Arsenal’s performance in the English top division this season has been nothing short of spectacular.

Despite the fact that they lost against the Red Devils, they are ranked first and have a perfect winning streak. Throughout the course of this campaign, they have scored a tone of goals and developed some serious momentum.

They will be eager to advance far in the Europa League, and it is safe to assume that their ultimate goal is to win the championship. Zurich, though, has recently been in a complete mess. They are ranked second to last in the standings and have a 100% losing record (two draws excluded).

Only the side that finished dead last in the competition allowed more goals than them, and they have scored the fewest goals in the whole tournament. And to top it all off, they have little experience playing European games. The way things are going, anticipate Arsenal to win this Thursday.

These two squads are facing off against one another for the first time in this matchup. Zurich is currently on a two-game losing streak, during which time they have conceded a total of six goals.

Additionally, they had a losing streak of another three games and had lost their last 10 games overall. The Gunners, on the other hand, had won 12 of their previous 14 games in total, going on two different six-match winning streaks.

Additionally, one of their two losses during this run was against Manchester United. Also keep in mind that three of their previous five road trips had ended with three goals or more. Given these findings, anticipate a successful performance from Arsenal on Thursday. 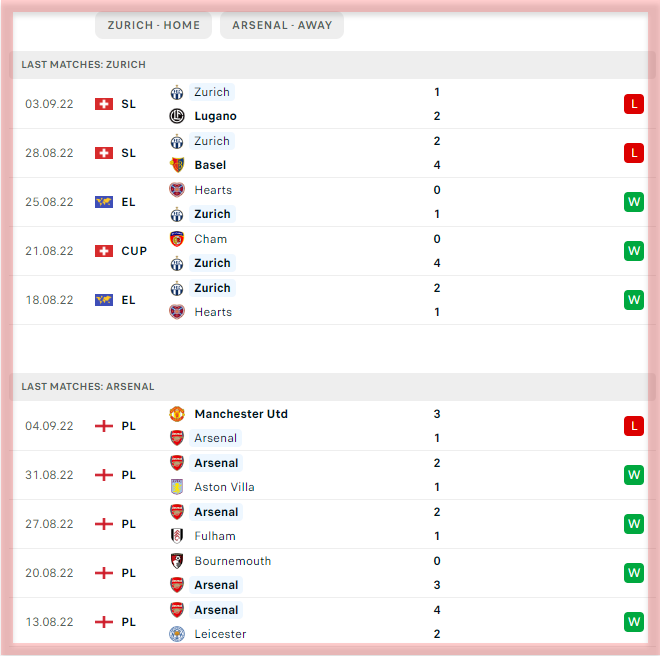