FC Sion vs Servette – The final round of the Swiss Super League begins on Sunday, with FC Sion hosting Servette, who are just above the relegation zone. At Stade de Tourbillon, these two teams will square off.

With 43 points from 35 games, Servette sits in sixth place in the standings. They won 12 games in the league, drew seven times, and lost 16 times.

Their troubles on the defensive end of the field have also been a major factor, with 63 goals conceded so far. The visitors drew 0-0 against Basel in their previous match for the second time in a row.

They have nothing to play for in this dead rubber of a match on Sunday because they will neither qualify for Europe nor avoid relegation.

FC Sion, on the other hand, is in eighth place on the standings with 40 points. They won 11 times in the league, drew seven times, and lost seventeen times.

They scored 43 goals while allowing 64, indicating that defense needs to improve significantly. FC Sion will be hoping for a repeat of their Super League success over Lausanne, which they won 2-1.

They need to at least draw this upcoming game to stay out of the relegation zone, as Luzren has a superior goal ratio than them and could completely transform the situation.

In their last four league matches, both teams have won twice. Both sides have scored in each of their last six head-to-heads. Servette won 2-1 in the reverse fixture in March.

Servette, on the other hand, has lost their last four games in a row. However, they have won the last two away h2hs by a score of 2-1.

Given their varied h2h performances, we believe a home win or draw is the most likely outcome, given the hosts are in desperate need of a point. 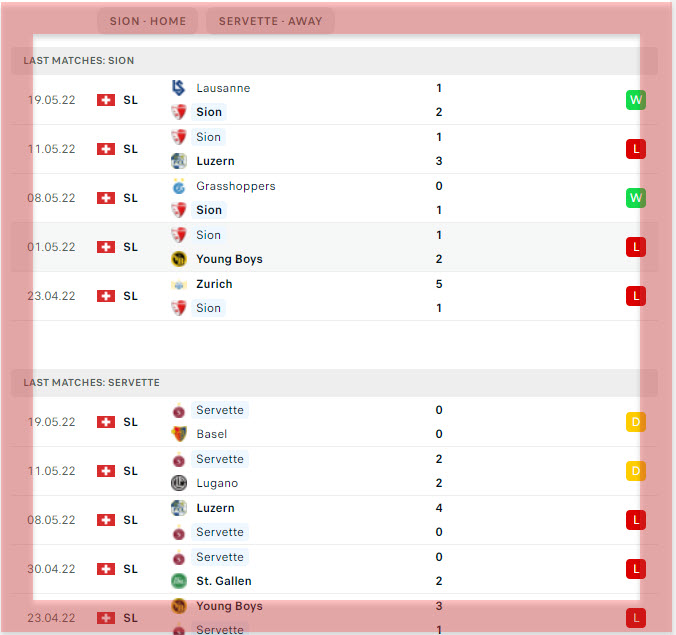