FC Porto vs Estoril – FC Porto has already won the Portuguese Cup, so they only need to win one more game to win the title. This Saturday, they will play Estoril at Estádio do Drag.

With 88 points from 33 games, the Dragons are at the top of Primeira Liga. In the league, they won 28 games, tied 4 games, and only lost once. They have scored 84 goals and given up only 22, which shows how talented everyone is on the team.

Porto is the new champion after beating Benfica 1-0 last Saturday. They had a nearly perfect season, with only one loss. Last month, they lost 1-0 to Sporting Braga in the league. That was their first and only loss so far this season.

On the other hand, Estoril has 39 points and is in eighth place on the table. They won 9 of the 33 games they played, tied 12 games, and lost 12 games each. They finished the season strong enough, but not good enough to get a spot in Europe.

Estoril is coming into the game after beating Moreirense 1-0 in their last Primeira Liga match. In their last 6 games, the team led by Bruno Pinheiro has scored 5 times when they tried to score. During the same time period, 9 goals have been scored against them.

Porto has won the last eight head-to-head matches in a row, and they have kept four clean sheets in a row. After Estoril won the league in 2014, they couldn’t beat this team. Over 3.5 goals were scored in each of their last two league games.

In the league, Estoril hasn’t been able to beat the Dragons in their last 9 games. They come here after winning 5 straight games at home. Porto has never lost a home game this season, and they haven’t lost any of their last 31 home league games, either.

Estoril, on the other hand, hasn’t won a league game away from home in the last eight. They have also lost their last 8 head-to-head matches against Porto, and the last time they beat Porto was in 2014.

We think Porto will win by two or more goals because they will enjoy playing at home against Estoril on what looks to be a day with a lot of goals. 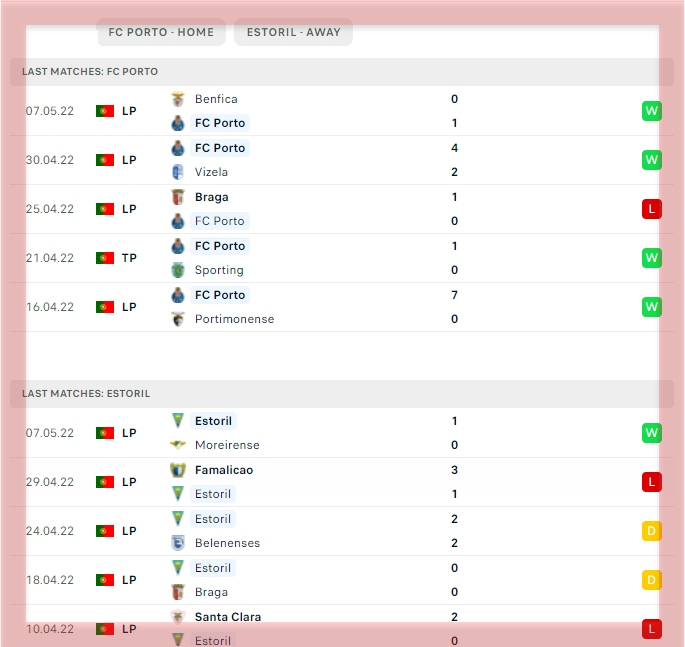