FC Midtjylland vs Randers – Midtjylland has been in excellent form recently. In their last seven games, the club has gone undefeated, scoring over 1.5 goals in six of them. Their current form has helped them secure a spot in the Championship round as the second team. They are only three points behind the table’s #1 team. The team’s current standing has earned them a spot in the Champions League qualifying round. However, in order to guarantee promotion, the squad must win this game as well.

Midtjylland’s most recent encounter was against Silkeborg, in which Midtjylland scored four goals to Silkeborg’s one. The game finished 1-4 in overtime.

Randers’ performance has been spotty in recent games. The squad may be in good form for a few games before slumping, resulting in cold streaks. The team is currently suffering from a three-match losing run. They’ve also failed to score in two of the three games. Randers are currently in last place in the Championship round with only 43 points from their games.

Randers’ most recent encounter was against Copenhagen. Copenhagen scored two goals and outplayed Randers, leaving them goalless. The final score was 0-2 in overtime.

Midtjylland has been in good form recently, going undefeated in their past seven games. Randers, on the other side, has gone three games without scoring. The following match will be difficult for Randers.

The hosts are the clear favorites to win the match. With Midtjylland in excellent form and Randers playing on the road, we may anticipate Midtjylland to keep a clean sheet. 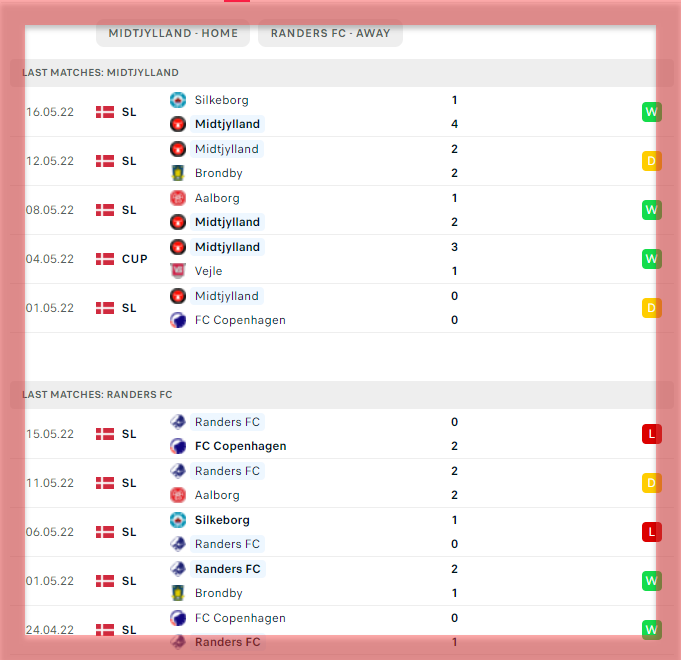