FC Lugano vs FC Zurich – Lugano has performed admirably in their matches this season, with inconsistent outcomes. Over the course of the season, the squad had 15 wins, 6 draws, and 13 losses. With 51 points from six matches, they are currently in fourth place in the league rankings. With only two matches left, the squad still has a chance to qualify for the Conference League if they win their remaining games.

Lugano’s last encounter was against Servette. Both teams scored two goals in the encounter, which ended in a 2-2 FT draw.

This season, Zurich has performed exceptionally well in their matches, resulting in the team remaining in first place. With an 18-point lead over the second-placed club, they are unrivalled in their position. Their present ranking has also guaranteed them a spot in the Champions League qualifications. Only four of their encounters have ended in a loss.

Zurich’s last encounter was against Lausanne Sport. Both teams scored two goals in the encounter, which ended in a 2-2 FT draw.

Lugano will struggle in the forthcoming matches against Zurich, who are in excellent form. Zurich is unbeaten in their last five matches and had a four-match winning streak until their last match, which ended in a draw. In the last five games, they have also scored over 1.5 goals. 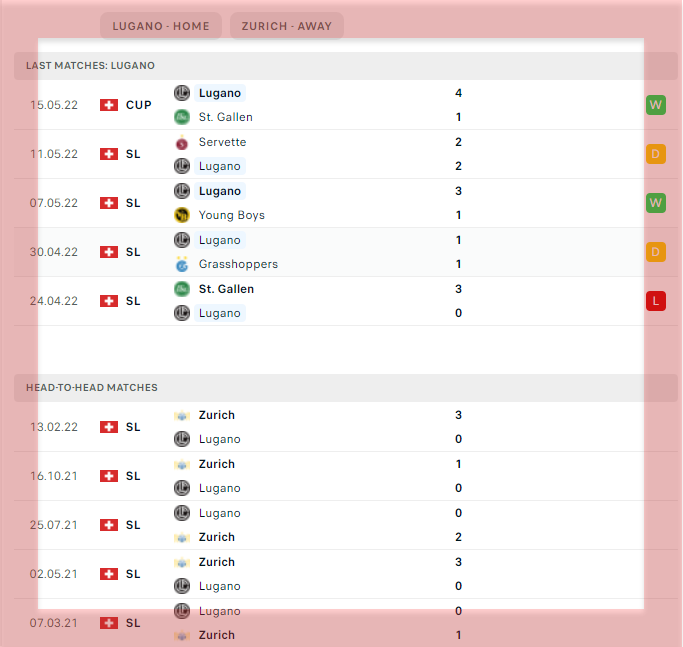