FC Koln vs Schalke – FC Koln and Schalke will play each other at Rhein Energie Stadion on Sunday afternoon to conclude Matchday No. 1 of the 2022/23 Bundesliga season.

Schalke did not need much time to return to elite-level football, as they won the 2. Bundesliga title at the first attempt last season. Schalke made some unusual off-season decisions, including hiring former Arminia Bielefeld manager Frank Kramer as their new head coach.

Kramer was fired by Bielefeld in the second half of the previous season in Germany’s top flight, and it will be quite fascinating to see how he performs at newly promoted Schalke.

Because they made so many changes to their squad this summer, the visitors are clearly one of the unknowns at the start of the competition. Maya Yoshida, Cedric Brunner, Sebastian Polter, Rodrigo Zalazar, and Thomas Ouwejan are among those who have joined the team after beginning in the 0-5 triumph over lower-division Bremer in the first round of the DFB Pokal seven days ago.

In terms of the German Cup, FC Koln did not do well with the early draw, as it sent them to Regensburg for a match against the hottest team at the start of the 2022/23 2. Bundesliga season.

Koln was defeated on penalties by Jahn Regensburg last weekend after a 2-2 tie in regulation time. Can they recover at the start of the league season?

FC Koln will rely on tradition, as they have traditionally performed well at home against Schalke in the past. FC Koln will also be coming off three straight victory over Schalke.

In four of the previous six head-to-head meetings, both teams scored. FC Koln have a lot of firepower in the final third, with players like Mark Uth (who scored last weekend against Jahn Regensburg), Anthony Modeste (the team’s top scorer in the last few years), and Sargis Adamyan (the latest acquisition), who all started the cup tie against Jahn Regensburg eight days ago. 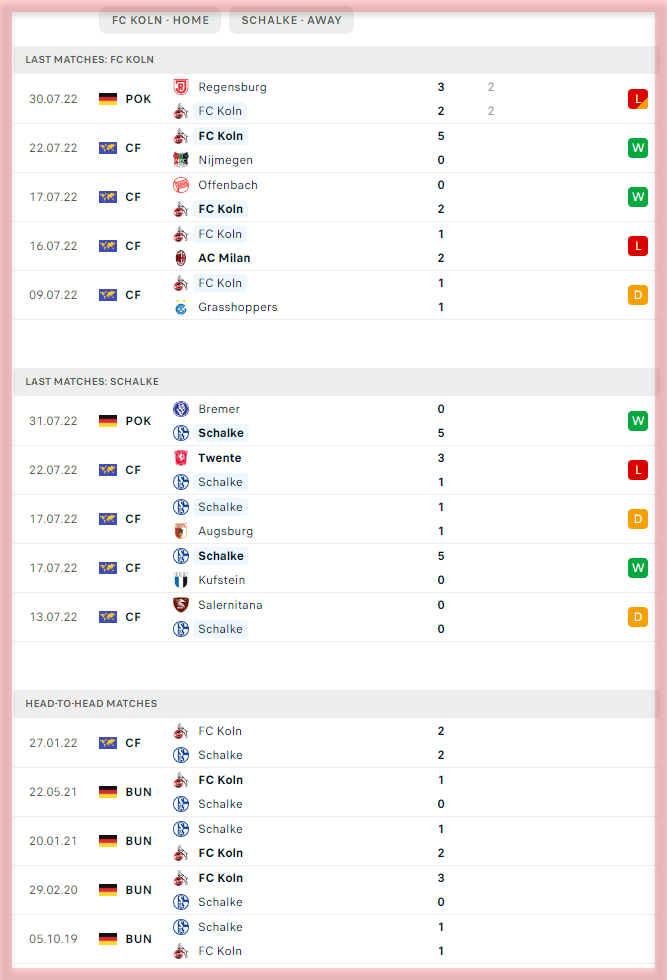